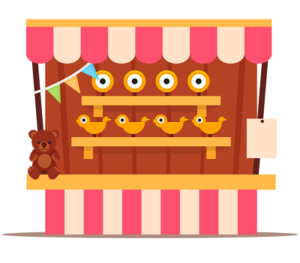 Head to a fairground anywhere in the country and you’ll be presented with a wealth of different games that you can play, with the possibility of winning a prize if you’re good at it. Can you hook a duck onto the end of a stick? Are you able to shoot down some tin cans or knock over a clown silhouette with some bean bags? These are the sorts of questions asked of punters, many of whom will include young children.

Because most of the games don’t offer cash prizes, they don’t necessarily come under the jurisdiction of the United Kingdom Gambling Commission. Instead, it feels a little bit like many of the operators are free to set them up however they want, with no system of checks and balances in place in the same way as there is for casinos or bookmakers. In essence, you pay your money and take your chance on whether the operator is honest.

Rigging The Odds In Their Favour 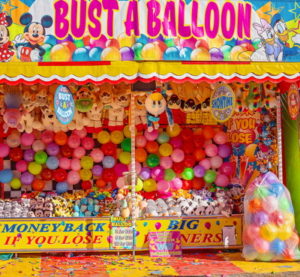 Most sensible people wouldn’t really expect a fairground game to be 100% fair, yet most of us go out of our way to play them regardless. Perhaps it’s a sense that people are innately good that encourages people to take part in a game that’s almost certainly fixed, or maybe it’s just a desire to win. It’s also likely that many parents take part because of the nagging of their children to win them a prize of some sort.

Regardless of the reasoning, many of us will have taken part in games that we don’t stand a very good chance of winning. Whilst casinos and sportsbooks need to adhere to regulations that ensure that the services that they’re offering to gamblers are fair, the same is not true in the ironically named fairgrounds. You might imagine that it’s just the travelling fairs that use such underhand tactics, but that’s not true.

A BBC investigation in 2013 entered a team of people into Thorpe Park, the well-known theme park in Surrey. What they discovered was that the workers use a series of underhand tactics to limit the chance of the player from winning, unless the bosses actively want some people to win prizes. This is often done early in the day so that they walk around the park with the prize, encouraging others to take part in the afternoon.

The likes of wax applied to objects that need to be knocked over or even moving targets whilst they’re being aimed at are common tactics, as is the likes of demonstrating how the game works with one type of equipment before swapping it out for less capable equipment when its time for the customer to play. Even a ‘prize every time’ style game like hook-a-duck isn’t above sneaky tactics being used.

Whilst there might well be a prize on offer every time in such games, it’s never the case that the prize that you’re likely to win is the best one on offer. If there are 100 ducks in the pond for you to ‘hook’, it’s almost certainly the case that 98 of them offer the lowest prize available. This means that they’re not lying by promising a prize, but also that they can keep their costs as low as possible to ensure a profit.

None of which is to suggest that all fairs are fixed, of course. There will be countless people out there just trying to earn an honest living. Yet it’s also the case that they will set up the games that they offer to ensure that the odds are always in their favour. In that sense, it is no different to the fact that the National Lottery’s main game has odds of 45,057,474 to 1, given that people do win at both.

Some Games Are More ‘Fair’ Than Others

The table above looks at the most popular games to rig and the things that you need to look out for when you’re playing them. There’s not much that you can do to move the odds in your favour, so the best decision that you can make when in the fairground is to avoid them altogether and opt for games that are easier to get something from. More on the latter idea elsewhere in this piece.

Which Games To Look Out For

Now that we know the games to try to avoid as much as possible, the next thing to do is to draw your attention to the games that you stand more chance of winning. There are some, even if the odds will still be in the fairground’s favour in the same way that blackjack is still in the favour of the casino. Always remember that if a fairground game looks too good to be true then it almost certainly is.

Make sure that you don’t rush into playing any specific games, instead watching other people do so and keep an eye on how things work out for them. Are there are techniques that they’re using that either seem to be working or, more importantly, definitely don’t? It’s also worth keeping an eye on the person running the stall to ensure that they don’t use different equipment to what the player is given to play with.

If you’re suspicious that something fishy might be going on when a fairground worker demonstrates how a game works, ask them if you can stand where they stood and use the equipment that they used. If they say no then bear in mind that the game is almost certainly rigged and you don’t want to be wasting your money playing it. With all of that in mind, the table above shows the best games to play and some techniques to ‘beat’ them.

Should They Be More Closely Regulated? 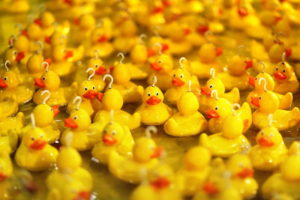 The obvious question to ask when it comes to fairground games is whether or not they should be more closely monitored when you take into account the fact that many children will play them. They are not really liable for any form of regulation, even to the point that they don’t have to tell you how often people win them, which is the case for the likes of slot machines and other casino games.

Because there is usually no cash prize on offer and even the prizes that you can win aren’t worth much money, the need to be regulated is none existent as far as the likes of the United Kingdom Gambling Commission are concerned. This means that people can waste vast sums of money trying to win a prize on something that could be nearly impossible to win in the first place.

The reality is that regulation is highly unlikely to come in on fairground games any time soon. As a result, the most sensible thing that you can do is to limit how much money you spend on games and to not play ones that look almost impossible to win. No one is going to stop you from spending your money, so you need to be responsible for your own behaviour unless and until that situation changes.

Obviously if you have children that can be difficult, but the amount of money that you’ll spend trying to win a cuddly toy that they’ve decided that they want will dwarf the cost of the actual toy itself. This is probably a good teaching and learning moment for both of you. Perhaps you can say that they can have three goes to win it and if they don’t then you’ll buy it for them from the shop? Either that or you’ll just end up spending a fortune.