Founded by Noel Hayden, Robin Tombs and Andrew Dixon back in 2001, Gamesys realised quite early on that they wouldn’t be able to win an arms race in the online gaming solutions world against some of the biggest companies around. Instead they opted to offer something different, something unique. In this way they could attract the interest of online casinos that didn’t want to offer the same old stuff as everyone else. One of the best examples of this is the fact that Virgin Games comes under the Gamesys banner, with both offering users a sleek and sexy interface for their gaming needs.

Sleek and sexy is one thing, but Gamesys wouldn’t have become the impressive company that it has without also offering a professional service and games to match. They’ve grown from the humble beginning at the turn of the millennium to become a company with over forty million users playing their games on a regular basis through numerous different online casinos. It is this combination of professionalism and beauty in their gaming that helps Gamesys to stand out from the crowd and win admirers all around.

Bingo is probably the game that Gamesys are most widely associated with, mainly because they they are a bingo brand operator. Family Fortunes and Monopoly are two brands that have a bingo game made by Gamesys, for example, and they have proven to be immensely popular thanks to their immersive gameplay. There are also plenty of instant win games – like the online equivalent to a scratch card – that the company has developed over the years. Again, this has often seen them link up with huge brands like Deal or No Deal to create games that will be instantly (no pun intended) recognisable to punters. It’s their bingo games that really stand out, of course, mainly because the company’s light-hearted attitude lends itself to that format.

None of that should give the impression that casino-style games aren’t also part of the Gamesys canon. They are also well-known for the slot games that they have developed, with vibrancy and energy being some of the stand-out features that their slots tend to offer. If you’ve been paying attention then you won’t be surprised to learn that branded slots are on offer here, with such titles as The Godfather Monopoly and Battleships available. One of the key features of all Gamesys games is the thought-out nature of the play, thanks in no small part to the captivating plots and storylines that they offer. They’ve given flesh to the bones of most of these games by adding in bonuses and free spins on a regular basis.

Plenty of casino operators will bring in one of the big boys of the industry, the likes of NetEnt or Playtech, to cover the vast bulk of their gaming requirements. It’s always good to have something extra to offer punters in a competitive market, however, so that’s where Gamesys comes in. They don’t offer the same quantity as the larger firms but there’s an argument that they do offer increased quality. After all, by limiting the number of games offered it’s possible to ensure that the quality of those games is as high as possible. Rather than taking one idea and using it in numerous different ways, for example, Gamesys tend to ensure that there is a genuine difference between each of the games that they offer.

The company aims to design games that are player focussed, with this attitude seeing them become the first to offer a real-money Facebook game back in 2011. They don’t have the same turnover or games each year as some of their competitors, instead choosing to add in just a couple of exceptional games rather than a number of mediocre ones. At the time of writing they offer games that are of the instant play variety. There may not be a huge amount of them when compared to the industry behemoths, but when the company adds a game it’s always of the highest quality.

One of the joys of offering a unique set of content is the ability to adapt it and change with the times. Gamesys have been quick to ensure that the games that they offer are moved offer to HTML5 as soon as possible, meaning that they can be used for virtually all platforms. iOS, Android and desktop computers can all be used for most of the games offered, whether that be bingo or slot offerings.

If you’ve been paying attention then you won’t be shocked to learn that live casino games aren’t something that the company offer at present. They’re all about doing things differently and having a unique approach to their games and, in fairness, there isn’t much you can do that stands out when it comes to live gaming.

That could change in the future and, if it does, this section will be updated accordingly.

It is normally standard for progressive jackpot games to require users to wager the highest stake if they’re going to be entered into the progressive pool. Gamesys have, as with all things, taken a different approach. 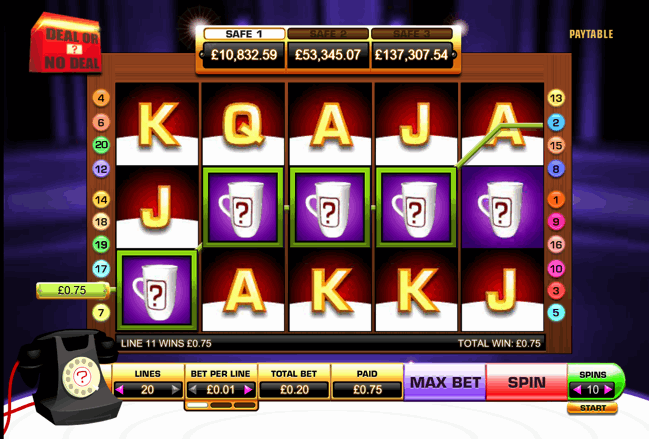 Instead of ruling out users from a big jackpot if they play a smaller stake, Gamesys games offer different pools depending on how much you’re willing to bet with. For example, on their Deal or No Deal slot you could be in with a chance of picking up an average jackpot of £480,000 if you bet 20p every time, but even if you only want to bet with 5p then the average progressive jackpot will still be around £115,000. Doing things differently in favour of the customer will always win fans.

Noel Hayden, one of the founders of Gamesys, used to hang around in hotels owned by his father. When he did that he would entertain himself by playing games like Space Invaders and this set him off down a path of loving the world of gaming. He persuaded Andrew Dixon and Robin Tombs to join him in setting up his new company and, together with a team of developers, they did just that. Their first major website was set up the following year under the title of JackPotJoy.com, offering punters something totally different from the online bingo experience they could get elsewhere. The uniqueness was what set the site apart and earned it a host of admirers.

In 2006 they came up with another idea that would prove popular – licensing a popular TV game show in the form of Deal or No Deal. It was one of the first ever branded slots and has since gone on to become one of the most successful ever in that format. The notion of working with brands made sense to the Gamesys crew. They saw it as a way of simultaneously winning punters who would trust the larger brand as well as a way of getting decent media coverage. This in turn led them into the world of social media marketing, getting into that before most of their competitors had realised its potential. This resulted in numerous industry awards heading their way, such as the eGaming Review B2B Award for Best bingo marketing campaign.

At the turn of the decade in 2010 the company’s development didn’t let up. Barbara Windsor, famous for her parts in the Carry On movies and later EastEnders, became a brand ambassador for JackPotJoy and began featuring in adverts for the site. It was the purchase of Virgin Games in 2013 that really developed the company’s reputation, however. Looking back with hindsight it seems an obvious move, considering both companies believed in the need to offer consumers something different and individual. It wasn’t that obvious at the time, though, yet the move proved to be a brilliant one. It took the company to the next level and allowed them to make changes, such as the sale of the JackPotJoy brand to the Canadian firm Intertain Group in 2015.