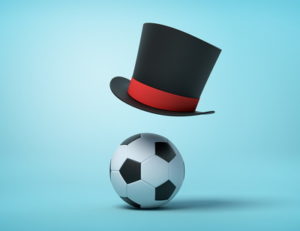 In football one of the rarer achievements in a match is for a player to score a hat-trick and indeed, these are even harder to predict, unless that player is considered to be a superstar and he is facing a team whose defence is not that good and susceptible to conceding a lot of goals.

The player who holds the record for the most hat-tricks ever, is unsurprisingly, when you think about it, Edson Arantes do Nascimento, otherwise known as ‘Pele’, with the Brazilian recording 92 hat-tricks throughout his playing career for Santos and New York Cosmos.

The average striker however will rarely score a hat-trick, some don’t even manage it in their careers and even those that do would be lucky to get one or two.  Despite that fact betting on hat-tricks is popular so here we look at the statistics behind them and tell you how likely a hat-trick actually is in a given game.

Out of all of the games that were analysed across the 10 seasons, it could be ascertained that the chances of a hat-trick occurring in a Premier League game carried a 3.34 percent certainty.

Players Most Capable Of Scoring a Hat-trick 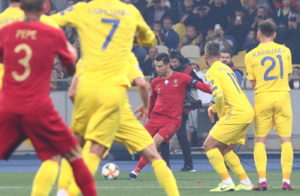 Over the years, there have been many scenarios where players have scored hat-tricks in games with some even known as ‘the perfect hat-trick’; a term coined from a player having scored a goal with either foot and his head as well.

These are much less common, especially in the top competitions, though they do still occur at the highest level. Pele though, can claim this accolade and at the highest level, in 1958 on the most prestigious stage; the World Cup final when he scored with both feet and his head in Brazil’s comprehensive 5-2 victory over Sweden on their home turf.

On January 7, 2020, Portuguese dynamo Cristiano Ronaldo entered the history books for becoming the first player ever to record a hat-trick in the Premier League, La Liga and Serie A when he hit three for Juventus, no forgetting his World Cup exploits with Portugal, most notably against Iberian rivals Spain in 2018 when he completed a hat-trick in dramatic circumstances with virtually the last kick of the game after he sent a last-gasp free-kick past Spain goalkeeper David De Gea.

For the best part of two decades, Ronaldo has gone head-to-head with the equally mercurial Lionel Messi for the title of the world’s best player and opinion has been firmly divided the world over. Both players are equally capable of scoring three in a single match. Following his first debut hat-trick for Juventus, he recorded his 56th hat-trick, indeed Messi can boast an impressive tally, while both players have the most Champions League hat-tricks ever recorded.

With both players firmly leading the way in the Champions League for hat-tricks scored with eight apiece, it is perhaps a testament to their talent and ability that the third place total stands at 3, with German striker Mario Gomez recording these when he played for Bayern Munich, while Filippo Inzaghi also stands at three, when he was employed by both AC Milan and Juventus.

In the Premier League, for a long time former Southampton, Blackburn Rovers and Newcastle United frontman, Alan Shearer held the record with 11 hat-tricks, which could well be surpassed by Manchester City striker, Sergio Aguero who has the same amount.

Perhaps interestingly, although regarded by many as one of the best ever Premier League players and goalscorers, Frenchman and former Arsenal striker Thierry Henry can only boast eight hat-tricks, however, he played in a team that scored goals from all over the pitch.

With Harry Kane still only in his 20’s, there is every chance that the Englishman could well eventually end up breaking the record for Premier League hat-tricks, with years left to play at the highest level, if he decides to stay in England.

It is also perhaps surprising not to see Wayne Rooney in the top five at least considering that he is Manchester United’s all time record scorer and made a name for himself out of being consistent.

For a considerable part of his career at Old Trafford though, he often had to make do with playing second fiddle to the likes of Ronaldo, Dmitar Berbatov, Carlos Tevez and Robin van Persie, while when he first arrived, he was competing with lethal hitman Ruud van Nistlerooy, the ageing Ole Gunnar Solskjaer, Alan Smith and Louis Saha for a starting place.

Interestingly, no defender has actually ever scored a hat-trick in the Premier League, however, there is some contention that could be attributed to this. In 2003, David Moyes’ Everton side beat Leeds United 4-0 with Steve Watson scoring three. Watson had been converted from a full back to a defensive midfielder by Moyes that season, though even so, this is still quite a feat.

It is worth noting that Manchester United’s left back Denis Irwin scored a hat-trick in a Champions League game. Meanwhile, if you were to look beyond the Premier League to the lower echelons of English football, you would find that the then Bristol City beanpole, Aden Flint hit a hat-trick from open play when his side beat Walsall 8-2 on 3 May, 2015 when they won League One at a canter.

The imposing centre back’s goals consisted of a volley, a back-heel rabona finish and a close range tap in. Manager of the South West club, Steve Cotterill said after the match: “I said to the strikers at the end of the game that they should be ashamed of themselves when someone like Aden has gone out there and scored three!”

In perhaps one of the most bizarre, yet inspired substitutions in English football over the last few decades, left back Steve Staunton came on for the second half of a game for Liverpool, replacing prolific striker Ian Rush and ended up completing a hat-trick against Wigan Athletic in a League Cup clash.  At the 2002 World Cup, ex-Aston Villa centre back Alpay Ozalan scored three goals for his native Turkey against Macedonia.

Arguably the most bizarre hat-trick came courtesy of Paraguayan goalkeeper Jose Luis Chilavert when he donned the gloves for Argentine side Velez Sarsfield on 28 November 1999 in a local derby Ferro Carril Oeste in a 6-1 landslide victory. Chilavert carved a career reputation out of scoring from penalties and free-kicks with his wand of a left foot, with the ball often nestling in the corner of a net. The odds of a goalkeeper scoring a hat-trick in a top flight game in a competitive league such as the Premier League, Bundesliga, Serie A or La Liga would be astronomical and not even worth entertaining.

Out of the games that were analysed based on these statistics, the chances of a hat-trick happening during a game in La Liga works out at 3.81 percent. 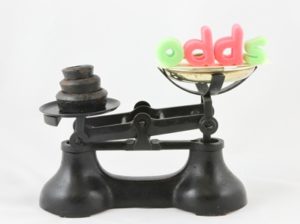 It is often the case that the market for hat-tricks in football games is priced considerably higher than the markets for a single goal and as a result, follows the same formula; usually the players who occupy the more attacking positions and then who are in the best form have shorter prices.

The market for hat-tricks is very rarely touched, especially in the Premier League, unless there is a player in a scoring streak who could well be up against an opponent who would find it hard to contain him.

Any match that has the likes of Ronaldo or Messi in, is always worth looking at the odds of a hat-trick for either of those players, however, the odds are likely to be a lot shorter. Some bookmakers sometimes have offers for a player to score a hat-trick in a game or they either have an incentive such as a boosted price for there to be a hat-trick scored over a particular round of fixtures.

Players such as Ronaldo and Messi often come around once every 30 or 40 years. The last time there was two players of equal talent and ability was when both Pele and Diego Maradona graced the footballing landscape. It is these kinds of players who make scoring look easy and as a result, it doesn’t matter who they are playing against.

The statistics speak for themselves; both Ronaldo and Messi have proven themselves to be almost superhuman and the fact that the former has also broken a record in achieving these numbers indicate that it could well be another 30 years before we witness such a feat again.