Betsson, the group that bought Jackpot 24/7 from Netplay in 2017, have pulled all of their brands from the British market on 21/10/20 – this applies to both new and existing customers.

The reason for leaving is simple, they feel the UK is too regulated and that is hitting them in the pocket so they prefer to focus their efforts on countries with less regulation and lower tax.

Customers will be able to withdraw up to the end of the year when any remaining money from UK accounts will be donated to GambleAware.

Jackpot 24/7 was a top brand with a loyal following when it was run by Netplay but since Betsson bought it they have run it into the ground.  It was likely their intention all along to pull it form the UK given their historical attitude to the market.  Tip for the future, if Betsson ever purchase a brand expect it to be closed to the UK in short order.

Fortunately we cover many casinos that do value UK players that you can read about in our casino section. 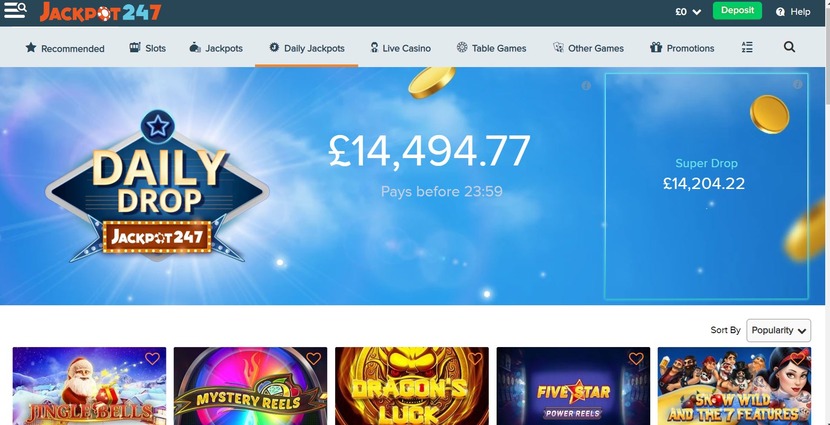 Did you ever get home from a night on the town back in the late noughties, switch the telly on and find yourself watching one of those interactive betting channels that ran through the night? If so, there’s a good chance you could have been watching Jackpot247 in its previous life – as Challenge Jackpot.

We’ll explain what happened there a bit later, for now, what you really need to know is that this recently re-launched online casino boasts a website that is a real winner, is packed with top games from top developers, and is of course well stocked with jackpots to suit any player.

The sign up process is super simple, but they take their responsibilities seriously as evidenced by the fact that you can only view their game library once logged in to your account. This stellar selection of slots, table games, and live games are backed up by award winning customer service courtesy of the Betsson Group, who own the company.

Intrigued? We were too. Read on to find out more.

As a company operating solely as an online casino, Jackpot247 are afforded the luxury of keeping their site super simple, with very little to worry about other than displaying their games clearly and giving players plenty of ways to filter them.

This they do with aplomb using a main menu that separates games by type (slots, jackpots, table games, etc.), and a sub-menu that takes things a little further, even allowing players to search for games by specific providers.

Speaking of which, you are looking at IGT, NetEnt, Nyx, Novomatic, Yggdrasil, Red Tiger… you get the idea. There are some lesser spotted developers too like Inspired Gaming and even some exclusive and proprietary titles from Betsson, but the bulk of the carefully selected library of over 400 games come from household names.

This perfectly balanced list provides plenty of industry favourites alongside some more interesting options and even some you can’t play anywhere else; a fantastic approach that keeps everybody happy.

Before you take a goosy gander at the table above, just be aware that the time frames shown do not include the time it takes the casino to process your withdrawal, during which time you are free to cancel if you wish. But don’t. That’s how they get you.

As usual, deposits are instant and there will be no fees taken for withdrawals by Jackpot247, but you should always be sure that your payment provider isn’t going to charge you either.

Room for improvement? Yes. But you shouldn’t see anything here that actively puts you off.

You can’t go too far wrong with an online casino that has won awards for its customer service. Strictly speaking it is Betsson who have the award, but since they own Jackpot 247 and handle the customer service side of things Jackpot247 are award winning by proxy.

All contact methods are available except for social media, but you won’t miss it as the live chat is answered almost instantly so there is no quicker way to find help online. You can also arrange a call back if you are miserly with the phone bill.

It’s not a 24/7 service (only the jackpots are available all day and night, not the staff) but there will be someone on hand from 07:00 until 00:15 which is fine for all but the real night owls.

The FAQ is a good place to start if you have an issue though, as the answer can often be found in there and they are quick to offer contact options if you are still stuck. In fact, they seem genuinely interested in improving this service since they request feedback on whether the answer was helpful or not. 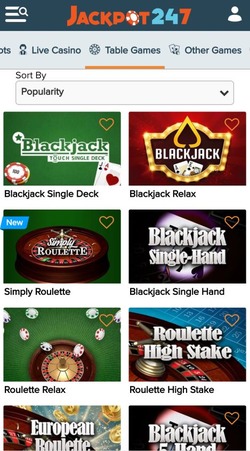 There is very little to complain about if you prefer to play on your phone or tablet, as Jackpot247’s re-design has left their mobile offering almost faultless.

The mobile optimised website is no more difficult to use either thanks to some nifty scrolling menu bars and a game search tool that drops you right where you need to be.

If you want to browse then you will need to do a fair bit of scrolling but there isn’t really a way around this, and if it bothers you that much then an A-Z view of all games is available and displays as titles only so many more games fit onto the screen. You can also ‘favourite’ games you like so you needn’t browse often.

It might have been useful to include a quick deposit button or something similar – you currently need to go via the menu button so it takes a smidgen longer – but that really is nit-picking.

There is an app but it is only available from the Apple store. There is no difference that we could see though, so Android users with a realistic data allowance will have no issues.

Even the high street brands would have trouble competing with Jackpot247’s history in terms of novelty value.

The brand started out as Challenge Jackpot, an interactive gaming channel launched by Virgin Media as part of one of their TV packages. A website ran alongside the television channel, and a company called Two Way Gaming was tasked with making a lot of it happen.

Not long after this NetPlay TV came along and acquired the business assets of Two Way Gaming for £2 million in stock, and a deal was struck with Virgin Media shortly after that to keep them at arm’s reach. However, it wasn’t until September 2011 that the Challenge Jackpot name was dropped in favour of Jackpot247.

From this point on the channel ran successfully as a TV show with a segment on ITV as opposed to being a channel in its own right, and past presenters have included Jeff Brazier, Sarah Jayne Crawford, and Emma Lee.

In the March of 2017 things changed once more. The Betsson Group purchased NetPlay TV for an impressive £26 million, but this also sadly meant the demise of the TV show, as the company wanted to focus solely on their online content.

In the (slightly bastardised) words of Freddie Mercury: internet killed the television star.

Read more about the company behind the brand on our Betsson company page.