We no longer recommend betting at Rizk. You can see a list of alternative places to bet on our bonuses page 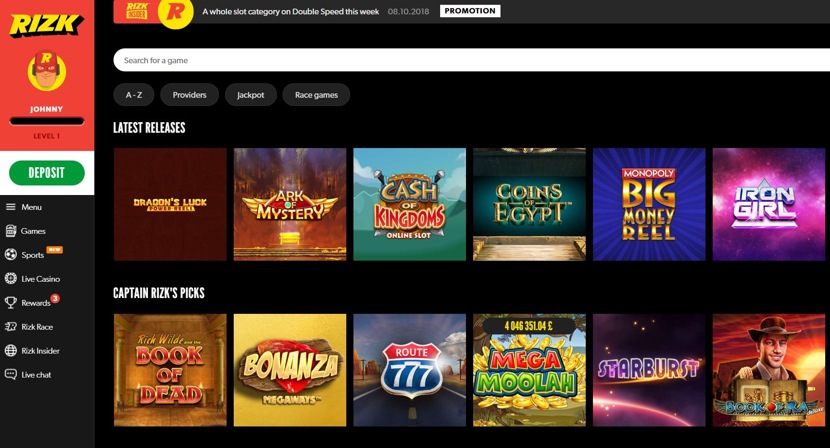 Captain Rizk keeps watch over the Rizk Casino, and he’s got a lot to look after.

Running on an independent platform and offering a modest 250+ games from numerous software providers, this instant play online casino hosts Slots, Jackpots, Live Games and more, and they do it with a few surprises up their sleeve. A Casino – cover your ears if you’re easily offended – “without the bullshit”, as they have eloquently put it.

Considering Rizk was only opened in 2016 it has done remarkably well, with awards already filling up Captain Rizk’s trophy cabinet and a marketing gimmick that has proven popular with players. Not to mention the invention of The Wheel of Rizk and a few other nice little extra features.

This is one for the player who doesn’t take themselves too seriously, and who doesn’t mind the occasional swear word; so read on to see if this caped crusader of a casino is for you.

Rizk also have a sportsbook, which is unique in the fact that it is proprietary and designed by them for them.  This is not something that is too common for casino-sportsbooks.  It’s modular design is incredibly user friendly, especially in-play.

The sportsbook was launched for the 2018 World Cup and was designed to shake up the sports betting landscape, it didn’t quite manage that but it is definitely a strong addition to a very good casino. 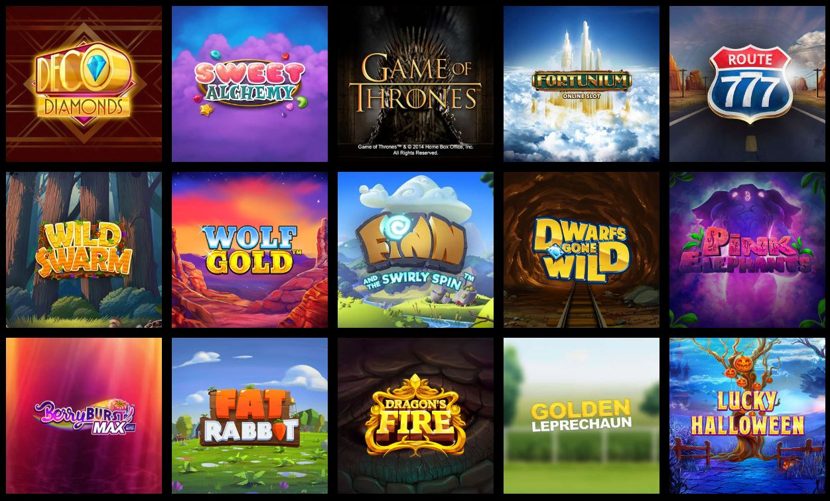 Microgaming and NYX Gaming (Nextgen) are the favourite providers at Rizk, but they have kept things varied by also including hits from NetEnt, Play’N Go, Yggdrasil, IGT and Red Tiger, among a few others. We say ‘hits’ because Rizk don’t accept middle of the road slots, they only include the very best each provider has to offer. All in all this adds up to around 250 slots which is a comparably small number if you have ever been on another casinos site, but this boutique approach guarantees no fat on the bone and still offers plenty of variety and choice.

The homepage displays only what you need to see, allowing you to get straight down to playing.  Navigating the game roster is no trouble if you have a favourite provider as you can list them as such, otherwise your only options are A-Z, Jackpot, Table, and Race Games (Rizk Races, not racing themed – see below). Other categories are available but you have to scroll to find them; this needs work in order to be more user friendly. Never fear, though, as the customary search bar is also an option if you have an old favourite in mind, and drop downs provide further info on games you haven’t played but might be interested in which is a nice touch.

The site itself is well designed in terms of theme and tone, carrying a sense of carnival fun with a superhero comic twist. It’s a shame that this isn’t built upon further, as the theme sort of trickles out on most pages – unless you play the Wheel of Rizk which is great fun. We never thought we would be asking a casino for heavier graphics but they could actually enhance things here. Still, the calibre of the visuals when there is something to look at are top drawer, and Captain Rizk’s voiceovers can’t fail to make you smile.

Overall the site works well, loading times won’t leave you frustrated, and there is just enough character to keep you interested. Navigation could do with a slight rethink at times but it is by no means troublesome. 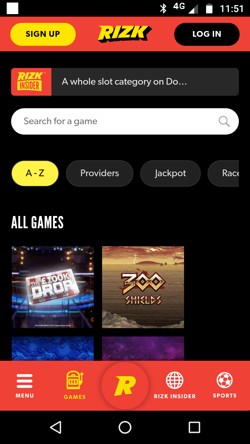 Since Rizk did a decent job with the desktop site, we expected similar results from the mobile offering. Oddly, we thought the site was more impressive on a smaller screen.

The necessity to streamline the site to fit a mobile screen has forced a design change, and so the character that was sometimes lacking before is ever present here. The red branding and black background works a treat, although the game catalogue is severely reduced leaving around 150 left to play with.

The site isn’t particularly graphic heavy, so loading times when opening games felt fine. The header and footer frame the content of the site beautifully, and are perfectly placed to manage your account and activity.

The menu button allows access to anything you can’t already see, including Live Chat and the Sports section of the site and here’s a tip: Captain Rizk’s face down the bottom is a shortcut to your Rewards. We definitely didn’t spend ages looking for that. Nope. 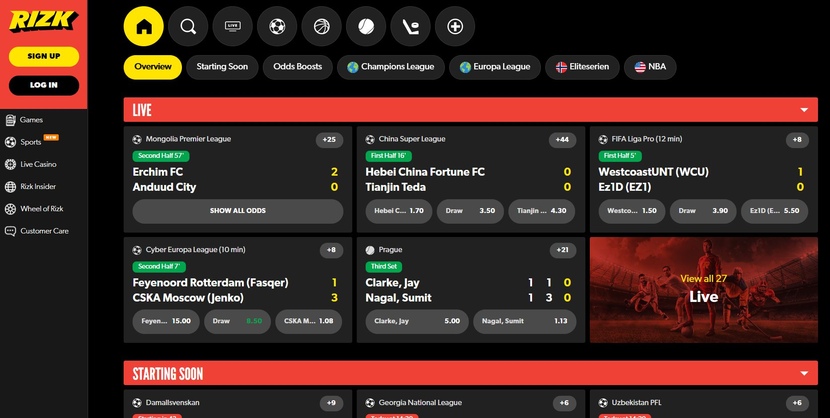 For bettors who take themselves and their sports betting seriously, Rizk is probably not going to cut the mustard. That’s not because there is anything wrong with it, it’s just not aimed at the more professionally minded bettors.

For anyone who bets semi regularly and also spends a lot of time playing casino games, though, it’s a pretty perfect solution.

There’s a decent selection of between 20-25 sports categories to bet on, and as well as covering everything you would expect to find at a bookie like Tennis competitions, Football going 3 leagues deep, Baseball, Basketball, Golf, etc. – you can actually bet on some interesting niche markets like esports and Futsal too. So yes it is a smaller book, but you wouldn’t say it was limited.

It isn’t the most user friendly sportsbook to navigate on desktop, probably because it has been designed for mobile first, but it follows a familiar top down flow when it comes to navigation; first selecting sport, then league/competition, etc.

Conversely, the mobile book is really quite natty. It’s essentially the same design but it works in the hand much more effectively than it does using a keyboard and mouse or touchpad. Check out Rizk Insider for bonuses and promos.

Aiming to process withdrawals within 24 hours is yet more proof that Rizk want their customers to be happy and feel fairly treated. Players aren’t exactly flooded with options when it comes to banking, although the selection they do offer should be diverse enough to suit all but the most particular of players.

Their limits are in line with the industry standard, but for more specifics see the table above.

Rizk Casino launched relatively recently in 2016, utilising their superhero mascot Captain Rizk as a way to stand out and keep it individual.

Don’t let this youthful veneer fool you though; Rizk keeps good company and has a wealth of experience at its back, being operated by MT SecureTrade Ltd which, in turn, is part of the Gaming Innovation Group.

They hold licenses from the UK Gambling Commission as well as Curacau eGaming and Malta Gaming Authority, with Malta being their official home.

Impressively, they won 3 Casinomeister awards the year they launched including ‘Best New Casino’, and were nominated several times at the EGR Nordic Awards in 2017 – that’s pretty good going for a company that was barely 2 years old at the time.

They have already expanded into the sports betting market so this may well be an area they build on next.

Read more about the company behind the brand on our Betsson company page. 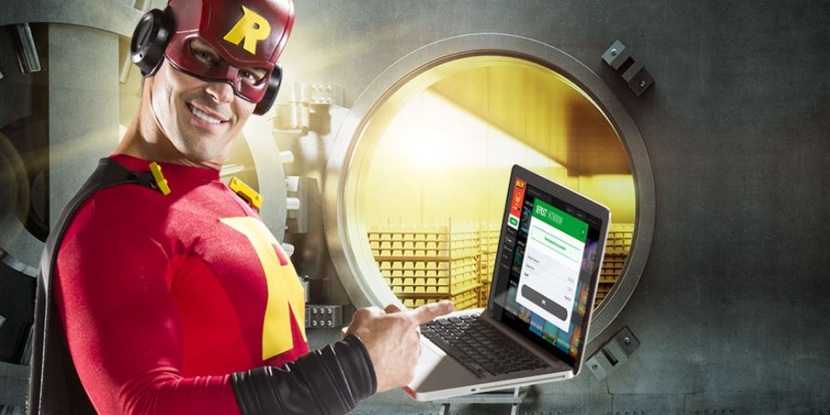 We love a live chat here at BettingWebsites, and Rizk offers an extremely responsive service that is available 24/7 in four languages. E-mail is another option if you can find it (we did, below) usually taking no longer than 3 hours or so to get a reply.

There isn’t much in the way of an FAQ, though, and what information there is takes a while to dig out. A dedicated Help section containing all of the relevant info would have been better than the way it is currently scattered over the site. There might be some useful info in the T’s and C’s but who wants to go trawling through that lot? They don’t advertise a phone line either.

So, customer support gets an unenthusiastic thumbs up in terms of availability and response times, but what about trustworthiness and customer care? You will be pleased to hear that the few disputes on record were solved satisfactorily, with Rizk handling the whole business courteously and professionally.