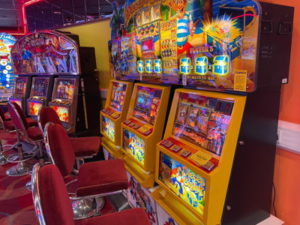 A brief visit to the arcades in the likes of Blackpool, Scarborough or Morecambe will present you with countless different games machines, flashing their lights and making amusing sounds. They are enticing to both parents and their children alike, with the kids wanting to play on the likes of the two pence drop games or the grabbing machines, which promise the ability to win a cuddly toy. Parents, meanwhile, are able to play on category B machines that offer much larger prizes (similar to the ones you see in betting shops, adult arcades and pubs).

At first glance, it all seems as though it’s family friendly fun. The adult games are typically located in their own roped off area of the arcade, with signs placed prominently announcing that it’s for people aged 18 and over only. It might seem as if there’s nothing to get excited about, but a closer look will allow you to realise that the games aimed at children are virtually identical in look and feel to those aimed at adults. At a time when we’re meant to be looking after the you and vulnerable, is that a problem? 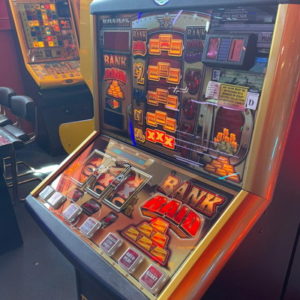 The key difference between them all is that only category B3 machines can be found in gaming centres such as arcades. Whilst category B1 and category B2 machines can offer the likes of roulette or some other form of gaming, the same does not apply to category B3 machines. The games available on them are much more traditional, akin to slot machines of old. Category D machines are the ones that are most common in arcades, if for no other reason than children can play on them.

Category C machines have a maximum stake of £1 and a maximum prize of £100. Category D machines, meanwhile, come in four different categories all of their one. They can offer one of the following:

The Venue Dictates The Machines Allowed

According to the rules and regulations of the United Kingdom Gambling Commission, there are three different types of amusement arcades. The first is what is classed as an Adult Gaming Centre. Also known by the Acronym AGC, these types of venue can have category B3, category B4, category C and category D machines. They need operating licences and members of staff will have to have a personal licence for Adult Gaming Centres to operate and, of course, under 18-year-olds aren’t allowed in.

There are then two versions of the Family Entertainment Centre, with the first being licensed and the second being unlicensed. A licensed Family Entertainment Centre is what most arcades would be, with the licence allowing for an unlimited number of category C and category D machines. The important thing is that the category C machines must be in an area that is clearly defined as being for adults only, with signs saying that people under the age of 18 aren’t allowed to play on them.

Finally, there are the Unlicensed Family Entertainment Centres, or UFECs. The idea of them being unlicensed is a bit of a misleading title, given that they still have to have a permit to operate that is issued by the local licensing authority. The permits tend to last for ten years unless they’ve either lapsed or been surrendered and they entitle holders to offer category D machines only. Whereas Licensed Family Entertainment Centres need a license from the UKGC, unlicensed ones don’t. 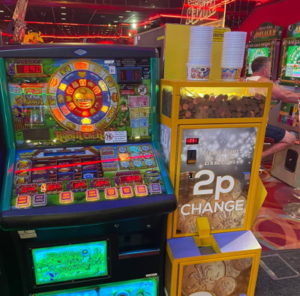 We live in an era in which the United Kingdom Gambling Commission is working hard to protect young and vulnerable people. During the government’s recent investigation into the Gambling Act of 2005, it was suggested, for example, that loot boxes should be counted as gambling to stop young people from buying them when playing video games. At the same time, companies that make online slots were instructed that they should in no way appeal to young people by using cartoon characters or the likes.

There was also a move to stop adverts using people that were under the age of 25 to advertise gambling products. That was something that the ill-fated Football Index fell foul of, having a complaint upheld by the Advertising Standard Authority when they used the likes of 19-year-old Jadon Sancho, 18-year-old Callum Hudson-Odoi and 21-year-old Marcus Rashford in one of their commercials. Such adverts were only allowed to be displayed in a place where an actual bet could be made.

Walk into an amusement arcade in a British seaside town, however, and you’d be forgiven for thinking that many of the machines that great you are for adults only. Plenty of the machines that are on offer for children and young people to play on look and sound just like those that are specifically limited to older people, doubtless enticing them into playing on them whilst casting an eye over at the other machines and wondering when they’ll be able to make the move up to play on them.

Indeed, some young people might well not understand why it is that they’re allowed to play on some machines but are banned from playing on others. It is not unheard of for teenagers to play on the category C machines because there is no one in the arcade actively trying to stop them, so it’s not hard to imagine that there is a direct link between those that play on such games and those that then go on to develop unhealthy relationships with gambling as an activity.

In many ways the lack of differentiation, visibly at least, between Category D and higher category machines and gaming cabinets has the effect of normalising gambling to younger people.  It makes it seem like moving from a 2 pence Category D game to a £2 category D game when they reach 18 is a normal thing to do.  It even normalises these machines to parents and guardians, who may see them as harmless fun but could discover these lead to later life gambling problems for their children.

Of course, the same argument can also be applied online with many slot games having similar designs and themes to games that children play.  Especially licensed games around heroes and tv/film.  Therefore, picking on arcades alone would be unfair, the question is should games of chance available to children be allowed to look the same as the same games adults play?

Should More Be Done To Separate Them? 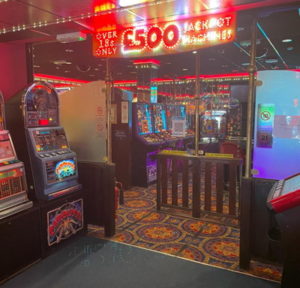 The idea that the machines that are only for adults are kept in a separate part of the Family Entertainment Centres is all well and good, but is that enough? We are living at a time when the UKGC is trying hard to stop young people from gambling and yet when they head to an arcade, perhaps on their holidays or during a weekend break, they are faced with machines that look virtually identically to the slot machines that are supposed to be limited to adults.

Is putting them in a separate area really enough to stop children and young people from thinking that these machines aren’t aimed at them? A young person is hardly likely to understand that they come under a different category according to the Gambling Commission and therefore they’re not allowed to play on them. They look the same, sound the same and even fell the same to play, meaning that they will be naturally drawn to them and want to play on them as soon as they can.

Of course, it’s tricky for the manufacturers of the machines. They need to make them appealing or else few people will play on them, so making them bright and noisy is the first step on the way to encouraging people to use them. Even so, they could still do that whilst not having them look virtually identical to the machines that the children are legally allowed to play on. It’s not entirely out of the realms of the possible that you could play on a machine and not know what category it came under until you were either paid out in cash or in tokens. 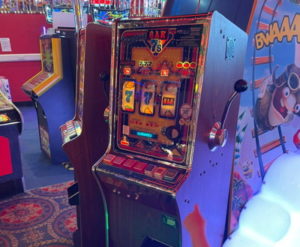 On top of the look that the machines boast, there’s also the fact that those that are aimed at children give them the chance to win tickets. In most of these arcades, tickets can be exchanged for prizes, with the more tickets you’ve got meaning that the better the prize will be that you can take home. Whilst the machines might dole out tickets much more readily than a slot machine would give out cash, there’s still an aspect of the games that means how often you win is random.

Children that want to win a certain prize are likely to have to spend significantly more money that the prize is actually worth in order to build-up the necessary number of tokens, so how is that different from a gambler hoping to win enough cash to ensure that they’re in the black? Those of a young age that regularly play on these machines in an amusement arcade will get into the habit of playing and playing until they’ve ‘won’ as much as they need to be comfortable, which sets them up in a bad frame of mind. 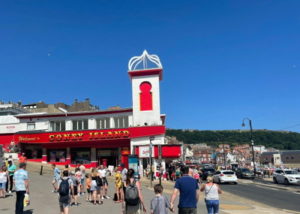 Whilst we all love to visit the likes of Blackpool, Scarborough and Morecambe, it is not unreasonable to suggest that those areas are amongst the poorer in the country. Whilst the owners and licensees of Family Entertainment Centres might make some money from them, the wider area does not benefit from their existence in the grander scheme of things. This is a major issue when you consider that those in poorer areas are more likely to suffer the consequences of gambling related harm.

We know, for example, that people from more deprived areas are more likely to use online casinos than those in areas with better prospects. It hardly takes a wild leap of the imagination to suppose that those people would also be likely to suffer from gambling related harm thanks to regular visits to the arcades. With young people often able to access the machines that should be limited to adults, it seems as though they’re being put in a situation where they’d be lucky if they didn’t develop a gambling problem.

Even a short period of time spend in such an arcade will allow you to witness local children coming and going from the arcades with a degree of regularity. They will come in to use the machines when they have some spare money in much the same way that certain adults will head to the bookmakers when it is pay day, so is this something that the Gambling Commission and other bodies should be taking more seriously? It feels as if they’re completely ignoring the problem as things currently stand.

Do We Have Our Priorities Wrong? 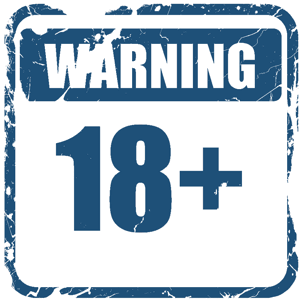 It’s not unreasonable to ask whether we have our priorities wrong when it comes to ensuring that young people don’t get caught up in a world of gambling. Are they more likely to want to spend money gambling because they’ve seen an advert for a gambling firm that uses someone under the age of 25, or because they’ve spent their youth playing on gambling machines that look and act the same as the machines that are specifically aimed at adults? The progression from one machine to the other seems far more likely.

That’s not to say that the Gambling Commission can’t target both things, of course. It’s absolutely right that the body looks at the likes of gambling sponsorship in football, but not at the expense of ignoring a far more problematic thing on the doorsteps of many deprived towns up and down the country. Is it just because this isn’t the sort of thing that you’d be likely to experience in London that means it can be so readily ignored? The people living in Scarborough, Blackpool, Morecambe and the likes wouldn’t thank you for that approach.