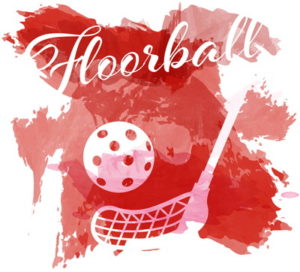 There are numerous sports out there that come from the same genus, with futsal and beach soccer being good examples of sports that have their basis in association football. You might not think that that as many sports could be derived from field hockey as that, but then you just need to look at the likes of bandy and ice hockey to see that it’s the case.

Football is another sport that fits into that category, essentially being like a fast and furious version of hockey that is played indoors.

It sees two teams of 6 take each other on in an attempt to score the most goals using sticks similar to the it sort of sticks used in field hockey to hit a plastic ball. It’s not a sport to be taken lightly, with shots recorded at speeds of in excess of 124 miles per hour.

It is a sport that can be played by both men and women, typically lasting for 3 periods of 20 minutes each, though this reduces to 15 minutes in the junior game. The sport finds its origins in one called Cosom Hockey that was invented in the 1960s, but today’s game was developed in Sweden in the 1970s.

Floorball markets are common with most bookmakers, especially those that operate outside the UK.  It can be difficult to find ante-post markets but within a few weeks of an event you will usually find lines available.

Betfair receive our floorball recommendation for good prices when markets are available, along with decent depth and a good lead time.

It is also worth looking at the other big brands if you want to have a choice of lines and prices. 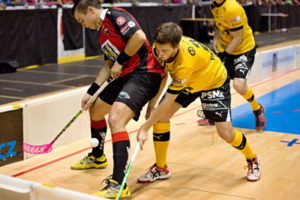 Once you’ve gained a bit more knowledge about a sport you’ll likely feel a bit more comfortable to bet on it, but knowing the sort of bets that you can place is another part of the battle.

It does follow the same pattern as the majority of sports in terms of what you can bet on, with the usual obvious markets being there. These include Match Winner, Goal Totals, winning margin, first goal scorers, period betting, etc., and ante-post bets on future competitions.

As always, doing your research is absolutely key if you want to ensure you give yourself the best shot before placing your wagers.

The History Of Floorball

When looking at the history of floorball it is important to differentiate between the game that we play today and any variation of hockey played indoors. When it comes to the latter category, some sort of indoor hockey has been played in Canada since the early part of the 20th century. These were essentially a type of bandy that took place indoors and was common in the 1950s.

Likewise a game of indoor hockey was played in Michigan during the 1950s and 1960s, but it wasn’t until the 1970s in Sweden that a more formal version of the game was developed.

Floorball began as a game to be played in schools for fun in Gothenburg, Sweden, spreading to other Nordic countries in the decade or so that followed. It moved from a school game to a sport as the decades passed and by 1986 the International Flooball Federation had been formed.

As if to demonstrate the ties to bandy, another hockey-like game, the sport of floorball is known as innebandy in Sweden and Norway and salibandy in Finland, translating into ‘indoor bandy’ and ‘hall bandy’. It is also known as unihockey in Ireland and Switzerland. 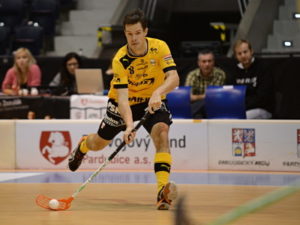 When the International Floorball Federation formed in 1986 the number of countries that actually played the sport was limited. Though popular in the Nordic region and elsewhere in Europe, it was mainly only in Japan when it came to more far flung places that took it seriously.

Indeed, by 1990 it was only recognised as a sport by 7 countries, but by the time that the European Floorball Championships took place in 1994 that number had doubled to 14.

Two years later and the first men’s world championships of floorball had seen that number increase further to 20, though only 12 nations took part in the tournament. It showed a clear linear development for floorball, however, and those numbers grew year-on-year.

In 2009 there were 58 national floorball associations that were recognised by the International Floorball Federation and when an association was formed in Sierra Leone it meant that every continent apart from Antarctica boasted a national association. 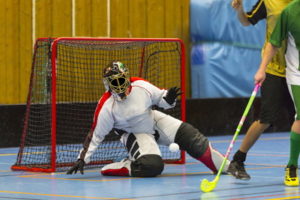 The Salibandyliiga was formed in Finland in 1986 and Sweden followed suit with the Svenska Superligan in 1995. It was a clear sign that the sport was gaining recognition in a real way, which was backed up by the December 2008 decision of the International Olympic Committee to officially recognise it as a sport.

Three years later and the IOC welcomed the International Floorball Federation into the Recognised International Sports Federations, which is the first step on the road towards a sport becoming part of the Summer Olympic program.

There are some who believe that floorball is the fastest growing sport anywhere in the world, with its acceptance into all of the biggest competitions likely in the coming years.

Whilst floorball is itself a variation of hockey, there are numerous variations of floorball itself.

Freebandy is one such example, having been developed in the 2000s. It’s similar in terms of the rules, with the main exceptions being that the nets are high up and it’s not illegal to use a high stick.

This is a simplified version of floorball that, as the name suggests, often takes place outdoors. It’s a far more informal game, unless you play it in Sweden where it has been formalised.

This game is played to the same rules as traditional floorball, with the obvious exception being that the players are in wheelchairs. This version of the game first occurred during the 2008 Men’s World Floorball Championships and there is also another version for electric wheelchair users.

Rules and How To Play Floorball 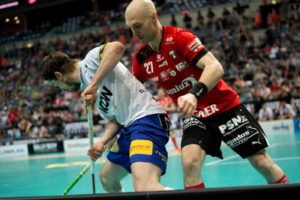 The first thing to know when it comes to floorball is that it is played indoors on a space measuring from 18 to 20 metres in width and 36 to 40 metres in length.

The playing surface is surrounded by boards that measure 50 centimetres in height and have rounded corners. The goals are 65 centimetres deep, 115 centimetres high and 160 centimetres wide, standing 2.85 metres from the nearest surround board.

There is a line in the middle of the pitch that is known, imaginatively enough, as the centre line and features two face-off dots that are 1.5 metres from the side board. There are also 2 face-off dots (which can actually be crosses) 1.5 metres from both sides of the board along the line of the goal.

Each team has 6 players, one of which is a goalkeeper. What adds to the fast-paced and exciting nature of floorball is that the goalkeeper can be removed for an outfield player for a short period of time if the coach decides it’s a viable tactic to do so. It obviously swings the advantage in favour of the attacking team but also leaves you open in defence.

Teams can make substitutions at any time and can change as many players as they’d like, often leading to the entire team being swapped out. Individual substitutions tend to be used if players are injured or fatigued. The 20 minute periods see the time stopped for instances such as time-outs, goals, penalties or whenever the ball is not in play. Each period is separated by between 10 and 15 minutes, depending on the competition. 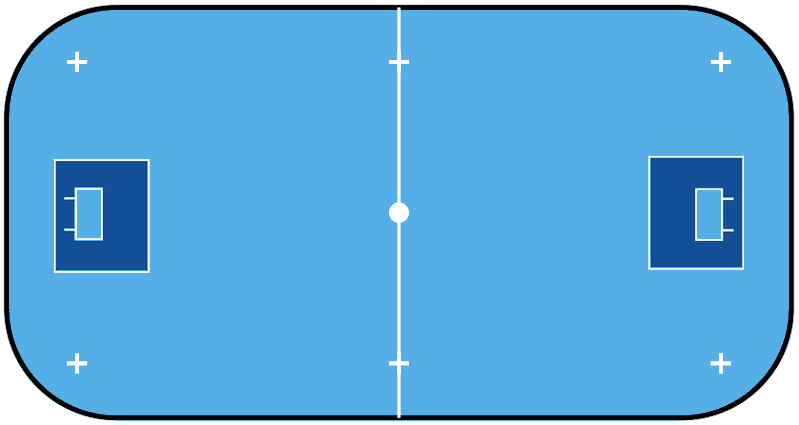 Time-outs last 30 seconds and each team gets one to use during the match. 2 referees officiate games, having equal authority, and if it’s a draw at the end of the 3 periods then 10 more minutes can be played in a ‘next goal wins’ type scenario. A penalty shoot-out follows extra-time if there’s still no winner.

When it comes to what players aren’t allowed to do, the list is quite long. Whilst some physical contact is allowed, it is closer to that that takes place during association football rather than ice hockey.

Players that break the rules are often given 2 minute penalties, during which time they have to leave the field of play. Fouls and unplayable balls see play resumed with either a face-off or a free-hit. Unsportsmanlike behaviour often results in a 10 minute penalty.

When it comes to using the sticks, players can’t lift them above knee height nor play the ball above that level. It’s also illegal to lift an opponent’s stick in order to get the ball. You can use your foot, but only once before it needs to be touched by the stick again. It’s not allowed to play without a stick and only the goalkeepers can enter the marked area of the goal.

Goalkeepers don’t use sticks and can throw the ball out to one of the players on their team as long as they are within their own half. If they come outside the box, however, they become an outfield player and are not allowed to touch the ball with their hands, just like all other outfield players. 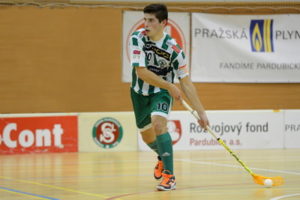 There are 2 main forms of equipment that are worthy of a mention, starting with the ball. It weighs 23 grams, has a diameter of 72 millimetres and boasts 26 10 millimetre holes. Modern balls have thousands of small dimples on their surface to improve aerodynamics, which has led to them being able to be hit at speeds of in excess of 120 miles per hour.

The other key piece of equipment is the stick. These are made of carbon and other composite materials, weighing no more than 350 grams and being a maximum of 114 centimetres. The blade of the stick has a mesh-like design and will be either to the left or the right. This denotes the side on which it should be held, with left-handers using right sticks and vice-versa.

All players tend to wear shorts, a shirt and socks, with indoor sports shoes the most common type of footwear. There is the option to wear shin pads and eye protectors as well as protective padding in the more exposed areas, though it’s not that common for players to use any of these unless playing the game at junior level. The only player that wears more than this is the goalkeeper, who will wear padded material on their chest and knees as well as a helmet.

Without question the biggest floorball competition in existence, it’s also one of the oldest still taking place. The men’s version was inaugurated in 1996 with the women’s version following the year after. It takes place every 2 years and was played in May and June until the IFF decided to move it to December in 2008.

This competition takes place every year and is for the Asian and Pacific countries with floorball associations. Created by the Singapore Floorball Association with the cooperation of the Asia Oceania Floorball Confederation, it acts as a qualifying tournament for the World Floorball Championships.

Despite its name, the Canada Cup is actually an international tournament that takes place in Toronto on an annual basis. It is a club tournament and is one of the largest outside of Europe. There are similar events that take place in the USA and Czech Republic, with the latter being the largest of its kind in the world.

This was first played in 2011 yet has grown to the point of being the most important International Floorball Federation completion for both men and women.

A qualifier for the Champions Cup, the EuroFloorball Cup was run annually between 1993 and 2000 before switching to take place every 2 years.