Although they have now all but left the UK market, Betsson take their name from a UK sports betting company that was acquired by the company in its previous form back in 2003.

They are a multi-brand betting and gaming group operating most prolifically in the Nordics and Western Europe, with many casino brands under their belt as well as a handful of sports betting companies.

They actually grew from a slot manufacturer in Sweden back in the 1960s, and had a big hand in the rise of famous game developer NetEnt, so their pedigree is strong, but the company has changed an awful lot over the years.

Now operating solely in the digital world, the group are working to increase their revenue by exploring new regulated markets in places such as Kenya and Colombia, and while they may one day return to the UK, it is not currently a market they feel is worth trying to crack.

Many of Betsson’s brands are run by wholly owned subsidiaries such as NGG Nordic Ltd, while others exist solely to hold the various different licenses the group has been granted.

Betsson Stump up for Betsafe

It was a complicated deal, but Betsson paid an initial upfront fee of €33.4 million for Betsafe in what they called a merger, even though the deal worked as an acquisition.

That amount was paid half in cash and half in shares, while a further €27.5 million would become payable depending on integration and performance during the following year.

The deal strengthened Betsson’s position in Nordic territories where the Betsafe brand was strong, and they vowed to keep all 148 members of staff in their jobs, including the two founders who joined Betsson’s management team.

Taking a Punt on RaceBets

The German horse racing specialist was the undisputed champion of horse racing betting, very popular in its’ native country and the UK and Ireland too; all markets Betsson wanted to expand in.

It’s proprietary race betting software would be integrated into some of Betsson’s appropriate existing brands, and the site itself kept alive as a niche operator.

The deal was worth €34 million with potential further performance based payments capped at €40 million.

In a strategic move to increase their footprint in the UK, Betsson took NetPlay and their associated brands, Vernons, Supercasino, and Jackpot247 for £26 million.

Vernons sadly didn’t work out and was closed down not long after the purchase, as was NetPlay TV as a company. Betsson wanted to concentrate on their digital offering and NetPlay TV did not fit into that.

However, Betsson made good use of Jackpot247 and Supercasino which are both still part of the companies portfolio of betting brands, although not in the UK.

These brands included Guts, Rizk, Kaboo, and Thrills, but the deal also included an agreement that Betsson would continue to use GiG’s platform for two years and at a premium price too.

What Betsson got here was four brands with untapped potential that could cement their position in various markets as well as give them exposure to a few others, plus providing the opportunity to create synergies. 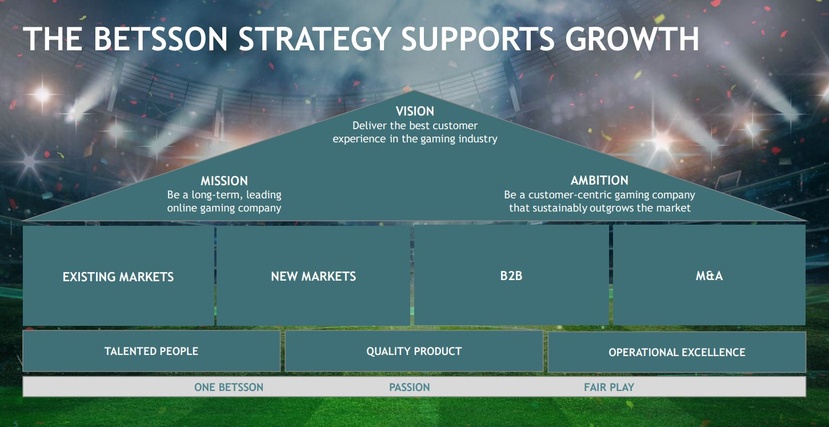 Betsson AB is a holding company investing in other online gaming companies operating all over Europe and, until 2020, that included the UK.

However, increasing regulatory restrictions and strong market competition eventually put Betsson off our fair isle, and now they focus on the Nordics and other European countries, as well as South America and Africa to a lesser extent.

Their multi brand approach allows Betsson to appeal to a range of customer demographics within the same territory, giving them more market share as a result. It also means they can tailor certain brands to specific regions while sharing tech capabilities between all brands where relevant.

They are predominantly a casino and gaming outfit but a select few brands do well in the sports betting arena, where 21.3% of their revenue was generated in 2021. They also have their own odds traders which many sports betting companies buy in, so this sets them apart and stands them in good stead to expand in this area should they choose to.

That said, as you can see from the image below showing 2019’s numbers, their revenue from sports betting has actually decreased over the last couple of years, but that data may well be misleading because of the pandemic.

Betsson Group’s three strategic pillars – talented people, quality products, and operational excellence – are the simplest way to understand what they are all about.

By attracting the best people in each field they can create industry leading products, and back them up with a robust business strategy that puts the right products in front of the right people at the right time.

Although they are now solely an online company with many brands, Betsson’s roots can be traced all the way back to the early 60’s when Bill Lindwall and Rolf Lundström began designing and manufacturing casino slot machines.

In those days the company was known as AB Restaurang Rouletter, but you may have heard of their other name, Cherryföretagen AB (Cherry).

As the digital age dawned the company bought a minority stake in a little known game development company called Net Entertainment, who would go on to become NetEnt, one of the biggest and best online slot developers on the world.

This set in motion a slightly confusing chain of events that saw Cherry become the majority owner of NetEnt, before their CEO, Pontus Lindwall (son of Bill) jumped across to head up the game developer, before jumping back again a few years later.

This coincided with Cherry buying out Betsson, a British sports betting company which would experience huge success over the next few years and add casino and poker products to its offering.

At this point, around 2006, Cherry decided to split the business into three, distributing NetEnt and Cherry Casino to the shareholders, while continuing to run their favourite son, Betsson, themselves and essentially becoming a fully digital company.

This is where the group as we know it today truly began, as Betsson started acquiring subsidiaries (including Betsafe) and branched out with its multi brand approach.

Oh, and Pontus Lindwall became president and CEO in 2016, re-joining the firm for the umpteenth time.

Given that the company all but left the UK market in 2020, they contribute next to nothing to the UK economy.

Rizk is the only brand still trading here, but for how long who knows.

They do employ 30 UK nationals in digital roles but exactly what they do or where they work from is unclear.

Of course Betsson will pay the relevant tax and gambling duties on any income from UK customers at Rizk, but it will be a drop in the ocean of their £66.6 million tax bill for 2021.

Since they barely operate in the UK anymore they have no need for real office space here either, so really, Betsson are of little to no interest to HMRC.