Cross-country skiing involves competitors using their own motion to move across terrain that is covered in snow. This is as opposed to using ski lifts or another form of assistance to move from one location to another. It began life simply as a way of people transporting themselves around but, as with almost any activity you can think of, someone decided to make it competitive and the sport developed from there.

In essence, the sport of cross-country skiing is similar to how skiing originated as an activity, with those participating either striding forward in something if a classic style or else moving from side to side in a skating motion to move from one place to another. Sometimes poles are used to propel the skiers too. Cross-country skiing is part of the discipline of biathlon events, which requires competitors to ski a distance and then shoot at targets. We’re just looking at the pure version of the sport here, however. 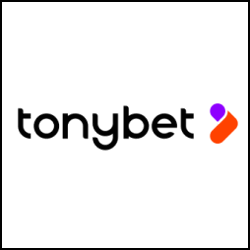 Tonybet have an exceptional range of winter sports skiing options and are one of the only sites to provide markets year round, offering advance outright lines often months before others.

You will be hard pressed to find a site with anything other than outright markets prior to the World Cup or other X-country skiing event, but once live Tonybet are again the leaders providing more in-play lines than other bookies.

As with other skiing disciplines looked at on these pages, the majority of mainstream bookmakers don’t tend to cover them in any real detail. Instead, if you’d like to bet on slightly more niche markets then you might need to explore the more specialist bookies that are out there.

If, on the other hand, you’re keen to simply place whatever bets you can on cross-country events then here are the main things you can look out for:

The History Of Cross-Country Skiing

It’s impossible to talk about the history of cross-country skiing as a sport without talking about the more practical side of the practice. Indeed, the very notion of skiing as an activity began life as a way of literally moving from one place to another over snowy terrain, with the word ‘ski’ coming from the Old Norse word for stick of wood, skíð.

The Easy Days Of Skiing As Transport 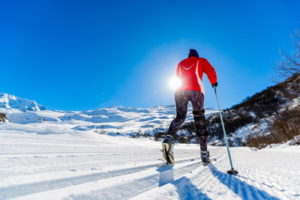 Whilst skiing is typically thought of as being a Scandinavian activity, there are some suggestions that it may actually have begun life in the area of Daxing’anling, China as long ago as 600 BC. Regardless, there is certainly evidence that the Finno-Ugric Sami people used the word ‘čuoigat’ to mean skiing as many as 6000 years ago. Not to mention the fact that the Norwegian Gulating law of 1274 specifically cited that moose were not allowed to be disturbed by ‘skiers on private land’.

The fact of where and when skiing started life as a means of transportation is, in many ways, irrelevant. What we do know is that those that lived in snowy areas would attach planks of wood to their feet to move from one area of the land to another, sometimes using a pole to aid them in their push. The first example of two poles being used, as they are today, was found in a depiction of such a thing being done in 1741. What we can tell you is that troops being equipped with skis date back as far as the 13th century, so the idea of skiing as a regular means of getting around was well-established even then.

The Military Introduced A Competitive Edge 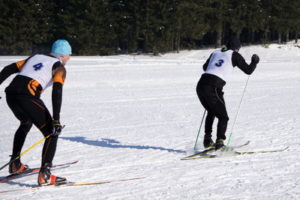 That link to the military is important to the development of skiing, largely because it was the Norwegian skiing regiments that first began to introduce skiing contests in four categories during the 18th century. The categories involved competitors skiing downhill at a fast speed whilst also shooting at targets; racing downhill between the trees; racing downhill without falling over; and racing long distances on flat ground.

It’s the latter discipline that developed into cross-country skiing, which the army viewed as important because of the desire to defend the nation. The feeling was that invading countries would have less experience of dealing with snowy terrain, giving the Scandinavian countries the advantage in any warfare. Being able to do it is all well and good, but being better than others at it is crucial, which is why it developed into a competitive sport. 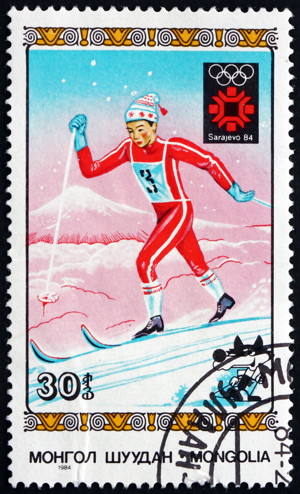 The first known public ski competition took place in Tromsø in 1843, with competitors asked to complete a course across a distance in the hope of doing so in the shortest time possible. Norway soon began to develop what was known as ski touring competitions, which involved going off-piste. Today they see those taking part leave the relative comfort and safety of a ski resort. The idea is to give those doing it the chance to see terrain that they would normally not be able to, with skiers able to access alpine climbing routes that would be impassable during the summer.

By the time the early part of the 20th century came about, people were experimenting with all sorts of new ways of skiing. One of those was a new technique known as skate skiing, with Johan Grøttumsbråten using the method during the 1931 World Championships that took place in Oberhof. Despite this, it didn’t develop as a genuine technique used by top-level skiers until the 1980s. That was because Bill Koch won the Cross-country Skiing Championships in 1982 using the method, leading to the Norwegian Ove Aunli taking it on from 1984 when he realised it was a much faster way of moving than the more classic style. 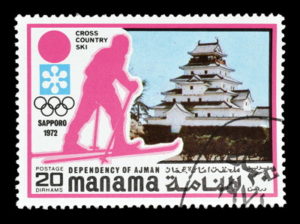 Cross-country skiing is just as liable to be caught up in controversy as any other sport and competitors have been caught getting involved in doping from time to time. One of the most well-known examples occurred at the World Nordic Skiing Championships that took place in Lahti, Finland in 2001. Four members of the Finnish gold-medal winning relay team tested positive for a blood plasma expander called hydroxyethyl starch that was known to be used to cover up the use of erythropoietin. EPO boosts haemoglobin’s ability to carry oxygen and is therefore seen as a performance enhancing drug.

Dozens of athletes have been found guilty of using EPO as a performance enhancing drug, including the Austrian cross-country athlete Johannes Dürr during the Sochi Winter Olympic Games in 2014. It is not an activity that is limited to one country or region, either, with competitors found guilty representing countries as diverse as Norway, Kazakhstan, Spain and the Ukraine. As athletes improve their ability to hide the use of PEDs, so too must the authorities improve their ability to catch them doing it. It is seen as a blight on the sport that runs the risk of ruining its reputation.

There are two main techniques that can be employed by cross-country skiers: classic skiing and skate skiing.

Which one is used will depend entirely on the event that the competitors are taking part in, with freestyle racing allowing either one according to the skater’s preference. Here’s a look at each of them: 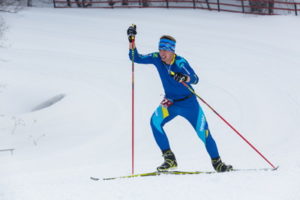 In the classic method of cross-country skiing the competitor keeps the skis parallel to each other and strides forward. This is possible because the middle section of the ski has a grip section that glides when the foot is in motion and grips when the foot is still. The skier can choose whether to use both poles simultaneously or at opposite times to the movement of the foot.

Skiers will often decide to ‘double-pole’ on level ground and when the downhill slope is quite gentle, giving themselves an additional propulsion technique that they wouldn’t get if they instead chose to opt for the ‘diagonal stride’. This is essentially like normal walking, with the exception being that the steps are longer and have more power in them. This is often the method used when skiers are either level or travelling uphill.

Rather than moving the skis in parallel, skate skiing involves the skies being pushed away from each other at an angle. This method gets its name from the similarity of technique between this and ice skating. Unlike the classic skis, there is no grip section on skate skis and instead the entire thing is covered in a glide wax.

There are different methods within the skate skiing genre, including deciding whether to double-pole or alternate poling. The different methods are good for different parts of the course and allow the user to go at different speeds, almost like going through the gears in a car. The fastest involves the skier skating without even using their poles, such is the speed that they’re able to generate. 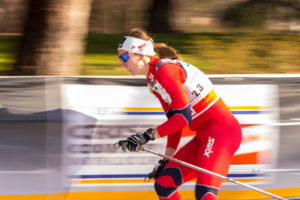 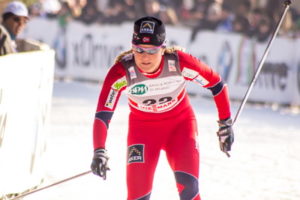 The main form of training for cross-country skiing is known as ‘intensity theory’ and involves five different levels:

Design Of The Racing Venues

The Fédération Internationale de Ski is the governing body for skiing events and in its Cross-country homologation manual it acknowledged that fans of the sport like to be able to follow what is happening on television. With that in mind, they lay down certain criteria to be taken into account with the design of cross-country courses that can enhance the experience for the viewer, with the following noted as important:

The idea is for the course to test the skier’s physical and technical attributes but in a manner that ensure that the course makes equal use of downhill, uphill and undulating terrain. There are two main types of venue that can be used, with the ski-in, ski-out being the least preferable as far as the television viewers are concerned. The horseshoe stadium is more along the right lines in that sense.

There are numerous different types of cross-country skiing events that take place on the international stage, including classic events, freestyle competitions, ski marathons and ski orienteering events. Obviously the way that the events work is different depending on the discipline that is being tested and so there are no one-size-fits-all rules at play in cross-country skiing.

Here’s a look at the main disciplines and how they work:

This commercially sponsored event takes place across Europe and began life in 2011. From the 2015-2016 tournament it involved ten events across the season, seeing competitors travel across varying distances depending on where in the world the event was taking place. Here’s an example of some of the races:

The Worldloppet Ski Federation was formed in 1978 and promotes long-distance cross-country skiing via ski races. At the time of writing there are 20 Worldloppet races that take place around the world, with the following being examples of the races:

The actual distance of each race will change from year to year depending on the conditions at the time, with the races usually broken down into categories. The full distance must be at least that of a marathon, with smaller races for less experiences skiers also available. The style used will depend on the race.

Skiers who complete races in 10 different counties, with at least one of them being on another continent, earn the title of Worldloppet Master. Gold Masters will have completed 10 full races and Silver Masters ten short races.

As the name suggests, these endurance races combine physical strength with technical skiing skills to see the competitors orientate themselves across difficult terrain whilst skiing at high speeds.

The World Ski Orienteering Championships is the most prestigious event and includes:

All of which are for both men and women.

There are three main competitions in cross-county skiing. Here’s a quick look at each of them: