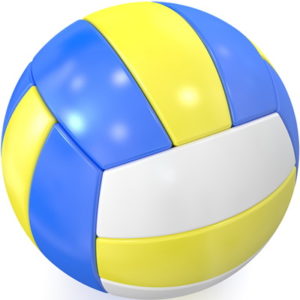 When it comes to sports that people watch for all sorts of reasons, volleyball has to be pretty high on the list. A team sport that sees two groups of six players take each other on by hitting a ball over a net and trying to score the most points, it was added the Summer Olympic roster in 1964 when the games were held in Tokyo.

Whilst most commonly associated with the beach, perhaps because of scenes such as those in the movie Top Gun, volleyball can actually be played indoors and on grass as long as the surface used is accommodating enough.

There are an extensive number of rules employed in volleyball, but in essence the game involves a ball being served over the net from behind the backline of the court and returned by the opposing team without the ball touching the floor.

Teams can touch the ball three times each before returning the ball, though the same player is not allowed to touch the ball more than once consecutively. When a team wins a point they also win the serve, with the game continuing until the required number of points has been achieved to win it. As with tennis, a given number of games will be played within a match.

Best Site To Bet On Volleyball With 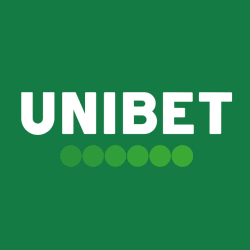 Volleyball can be found as a minor market with many of the larger bookmakers but if you want a little more match depth and more ante-post options then Unibet stand out from the crowd.

Generally Unibet are a little more inclusive of non-traditional sports compared to other bookies and this shows with Volleyball where they cover all major matches, make the bets easy to find and offer at least 20 other markets pre-event and in-play, including; action betting, match, point, set, over/under, race-to and other markets.

In terms of outright wagers they also tend to have the best prices around.

How To Bet On Volleyball 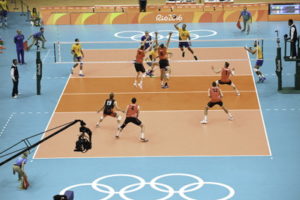 As you can see, there are any number of volleyball competitions that take place on a regular basis. Theoretically this means that there are all sorts of betting opportunities open to you, but the fact is that not many bookmakers bother to cover the sport in all that much detail.

That’s not necessarily a bad thing, of course, given that you can do a little bit of research and know more than the bookies. Add that to the ability to request bets and so on and you’ll be in a decent position to explore the various tournaments and place the bets you want to place.

When it comes to what to bet on, you’ll be looking at several key markets:

Find a decent bookmaker and you’ll be able to bet on the likes of whether a match will finish on more or less than a given number of points, who will win the 1st set, whether the team that wins the first set will be the same one as wins the match and so on. You can even place a bet on whether or not you think that there’ll be a 5th set in the match.

As always, the key to this is in doing your research so you know what you’re looking out for when it comes to exploring the odds. As an example of what we’re talking about, will a nation or team that regularly wins beach volleyball competitions automatically be primed to win standard volleyball games? It’s not a guarantee, so make sure you look into why not and what format the volleyball tournament you’re looking to bet on takes.

The History Of Volleyball 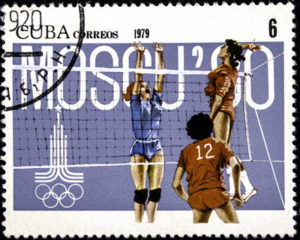 Sometimes, when you consider a sport such as golf, it’s quite difficult to envisage exactly how the game started life. When it comes to a sport like volleyball, however, it’s easy enough to picture a group of people passing the ball backwards and forwards over a net without letting it touch the floor. After all, who hasn’t been at a party or gathering where there are balloons and attempted to do the same thing?

When it came to volleyball’s first outing, it was the brainchild of a YMCA physical education direction named William G Morgan who lived in Holyoke, Massachusetts. He wanted to create a game that could be played indoors by a large number of people and would be suitable for the older members of the YMCA. Basketball had begun to catch on in the local area but was seen as being too physical, so instead he created his own game that borrowed characteristics from the likes of handball and tennis.

Morgan came up with a game that used the following rules:

The first exhibition game of the new sport took place at the International YMCA Training School in 1896, where Alfred Halstead, who was watching it play out, noticed that it involved a lot of volleying. Morgan had originally called it Mintonette as a derivative of badminton, but Halstead’s observation instead led people to give it the new moniker of volleyball. The rules began to be altered and refined and soon the game was spread to the various YMCAs around America.

The New Sport Is Refined 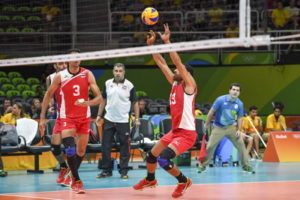 The new sport was immediately a popular one, though the idea of it being a less physically strenuous one than basketball was soon dispelled. More importantly, the rules being to be developed and refined as the game made its way around the world.

In the Philippines, for example, the ‘set and spike’ used for a serve was invented for the first time in 1916. The following year the scoring was adapted to mean that a team needed to gain 15 points for a win rather than 21. In 1919 the American Expeditionary Force distributed around 16,000 volleyballs to their troops and allies, resulting in the game being spread to more countries around the world.

One of the biggest changes to the rules came in 1920 when the notion of only being allowed three touches before the ball needed to be returned became commonplace. Interestingly, nudists became early adopters of the game as the 1920s wore on, so that by the time the 1960s came around a volleyball court was a virtually de rigour for nudist and naturist clubs.

The most popular variation of volleyball, and the one that everyone associates with the sport, is beach volleyball. It was played in the likes of Brazil almost from when the sport was first introduced to the country. In spite of this, it wasn’t actually adopted as an official sport that was backed by the FIVB until 1987. Even then it took another nine years for the International Olympic Committee to add the new variation to the roster of games played during the Summer Olympics, getting its debut in Atlanta, Georgia in the United States.

We’ll talk of that in more detail elsewhere on the site as it’s actually a totally different sport. 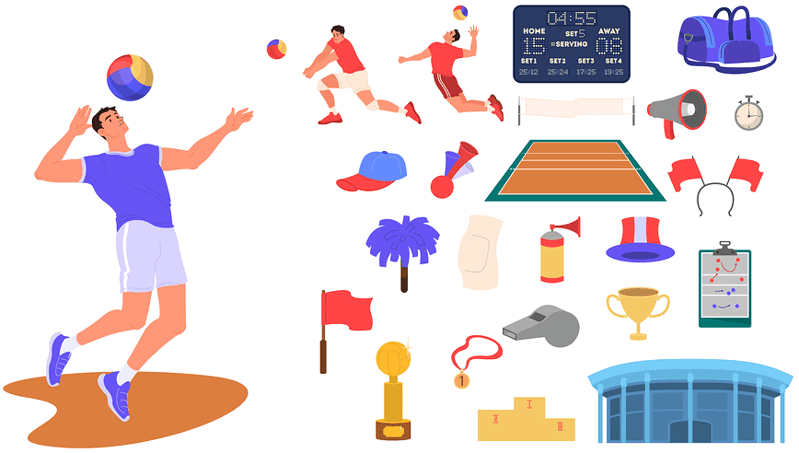 The game has moved on considerably from the days of William G Morgan at the International YMCA Training School. Let’s start by looking at the court itself. Nowadays a standard volleyball court is 9 metres by 18 metres in dimensions, which is then divided into two equal halves by the presence of a net that is one metre wide. How high off the court the net is is dictated by whether it’s men or women playing the game, sitting at 2.24 metres for women and 2.43 metres for men.

In indoor volleyball there needs to be a clearance of 7 metres, with 8 metres being preferred. 3 metres out from the net on either side of it is the ‘attack line’, which sorts the court into back row and front row areas. There are also six unmarked areas of the court where each of the players tends to stand. When a team gains the serve the players need to rotate one position, with player 2 moving to 1, 1 to 6, 6 to 5 and so on.

Around the court is what’s known as the ‘free zone’, which needs to be at least 3 metres wide and which the players can use after the serve is in play. If any part of the ball strikes the line that separates the court from the free zone then it is classed as in, much as it is in other sports such as tennis and football.

When it comes to the ball, it needs to be made of either synthetic leather or the real thing. According to FIVB regulations, the ball must have a circumference of between 65 and 67 centimetres and a weight ranging from 260 to 280 grams. The inside pressure should be 0.30 to 0.325 kilograms per cubic centimetre. Each governing body of the sport has their own rules, but these are the basic ones that most will follow.

How The Game Is Played 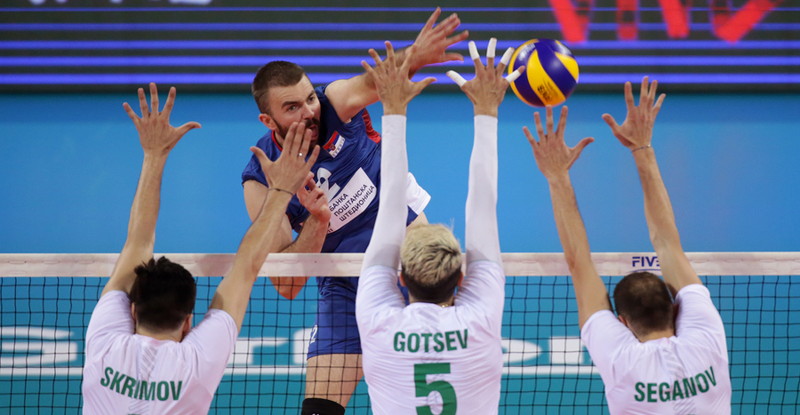 Volleyball is actually a far more complex game than most people give it credit for. In its most basic form it features six players on each team that attempt to win more points than the other side. Gameplay works as follows: 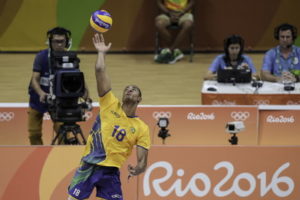 In essence, the rules of scoring in volleyball are quite simple. If the ball touches the floor within the boundaries of the pitch then the team that failed to stop it from doing so loses a point. If it touches the floor outside of the pitch’s boundaries then the team that hit it there loses a point. If a team commits a foul then they lose a point.

The team that wins the point also wins the serve. If it’s the same team that just served then the same player will serve again for them, whilst if service shifts to a different team then the players in that team shift position from when they took the previous serve.

In order to win a game, which is called a set in volleyball, a team must amass 25 points and have at least a 2 point margin over the other side. Matches are played in a best of 5 manner, with the fifth set being played to 15 points rather than the full 25.

The most prestigious competition that volleyball players can play in is unquestionably the Summer Olympics. Taking place every four years and seeing competitors from around the world go head-to-head in various sports.

It goes without saying that the various continents and volleyball-loving countries all have their own  volleyball contests and tournaments, so if you’d like to know more about then then it’s worth getting in touch with the governing bodies directly.

When it comes to volleyball at the Olympics, for example, the IOC welcomed standard volleyball teams to compete in the events in 1964.

Above we a look at some of the other big volleyball competitions in existence.