Unlike most of the other big gambling groups we talk about on this site, a significant portion of The Rank Group’s business involves offline venues, specifically high street casinos and bingo halls.

Of course they do operate online as well, they would be mad not to, but this is not their sole focus, so their approach is a little different.

The Rank Group have had an extremely varied and interesting journey to the top, having held business interests in engineering, traditional entertainment and leisure such as holiday parks etc, restaurants, and even the film industry – did you know that if it wasn’t for The Rank Group there would be no Bugsy Malone?

From their inception in 1937 by J. Arthur Rank, a young man originally from Hull, it seems they *“could have been anything that they wanted to be”, so how did they end up in the gambling industry?

We’ll get onto that in due course, for now, it is enough to know that they own Grosvenor Casino and Mecca Bingo, making them the biggest casino operator and the second biggest bingo club operator in the country.

*That’s a Bugsy Malone reference for anyone who was confused.

This is a quick rundown of The Rank Group’s business so you can get an idea of their size and the type of business they run, but we will go into more detail below.

The Rank Group uncharacteristically showed interest in the sports betting space in 2003, when they stumped up £63 million for online and telephone betting company Blue Square.

They owned the brand for 10 years but it consistently struggled under the new ownership, and in 2013 was offloaded to Betfair for a mere £5 million, with the potential of an extra £30 million if certain targets were met. They were not, and Blue Square was eventually closed down with customers migrating to Betfair.

The Rank Group have mostly stayed away from sports betting since then.

Grosvenor had originally tried to buy 23 casinos from Gala in 2012, but the Competition Commission weren’t happy with the deal and it had to be re-structured.

A year later and with 4 fewer sites on the sales ticket, Grosvenor successfully completed the purchase of 19 Gala Casino’s bringing their portfolio to more than 55 venues.

This came at a cost of £179 million, but it also made them the biggest casino operator in the UK.

This was a particularly big move for The Rank Group, as they wanted to expand their digital portfolio and Stride looked like their best opportunity to do that.

They made a £115 million cash offer for the company – which owned Daub Alderney who still run under the Rank umbrella – and this offer was accepted, seeing Stride’s business assets folded into The Rank Group.

This bagged them popular bingo brands such as Kitty Bingo and Lucky Pants Bingo among others like Aspers, as well as the technical ability to better compete online with rivals such as GVC.

Although not a huge deal, the sale of this Belgian casino was something of a turning point in Rank Group’s strategy. They could now focus solely on their core businesses and target international growth from them alone.

As a standalone casino the Blankenberge did not feature heavily in the group’s plans anyway, with them having sold off their other Belgian casino, Middlekerke, back in 2017.

The £25 million they got from the sale went straight to reducing the company’s debt after an extremely difficult year which saw almost all of their income streams disappear thanks to the nationwide coronavirus lockdown.

The Rank Group was formed in 1995 but the company’s history goes back a lot further than that as you will see in the following section.

It was initially set up to take over the business assets of the Rank Organisation, so the group started life as the owner of huge names such as Odeon Cinema, Pinewood Studios, Xerox, Butlins, Haven Holidays, and the Hard Rock Café. It was heavily involved in the leisure and entertainment industries and indeed, this had been where the Rank Organisation has started life.

Rather strangely for a ‘new’ business though, The Rank Group got to work divesting most of their assets, shedding companies year on year and gradually leaving whole sectors behind until eventually, all that was left of their entertainment empire was their logo, the gong man, famous as the introduction to all Rank produced films.*

From 2006, the group were only operating in one industry; gambling.

The Rank Group are still a majoritively UK focused business, with 74% of their income coming from venues in Britain, but they also have a foothold in the Spanish market thanks to their brand, Enracha, which accounted for around 7% of their revenue in 2019.

The ownership of The Rank Group is actually a much more complicated arrangement than we have been letting on. A company called the Guaco Group officially owns The Rank Group, having increased their shareholding steadily over the years and acquiring a majority holding in 2011.

This Hong Kong based group are themselves part of the Hong Leong Group, so as you can tell the corporate structure is complex to say the least, but Rank seem to be left alone to get on with things however they see fit. 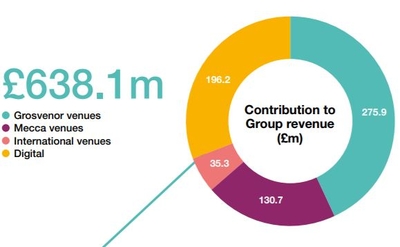 Although best known for their physical casino and bingo locations, the group operate a number of successful online casinos and bingo sites, and not just those attached to their physical brands either. However, this is an area they are actively trying to build on.

In Spain, they actually operate the number 1 online bingo site, Yo Bingo, but in the UK there are other big groups that have a much stronger digital presence in the casino marketplace, although their Mecca brand does well with regards to online bingo.

In 2020 their digital earnings accounted for 30% of their overall revenue, up from 19% in 2018 when they took over Stride Gaming, so there is clear evidence that their strategy is working. However, their Grosvenor venues were still way ahead accounting for over 43%.

History of The Rank Group

In 1937, Joseph Arthur Rank, started the Rank Organisation as a film production company. He was already relatively wealthy through his father who ran a flour mill business in their home town of Kingston upon Hull, and he had in interest in film through creating short religious films that aligned with his Methodist beliefs.

The company grew extremely quickly, mostly through acquisitions, and went on to become the UK’s largest and most vertically integrated film company. This is because they owned companies that could deal with every stage of the film making process, from production through to distribution, so all income from these films came back to Rank.

There were many more besides, and only a decade after the business began it owned 650 UK cinemas, 5 major film studios, and the UK distribution rights to Universal Pictures’ amongst other assets.

A few major releases for the company that you might have heard of include:

Over this time and the following few decades the Rank Organisation also diversified into the audio visual industry, the music industry (Rank Records Ltd was eventually bought out by EMI), and even some of the first motorway services under the name Top Rank.

In 1991 they took over Mecca Leisure Group, and their involvement in the film industry was nothing like it had been in its heyday. They scarcely made films by this time and most of their income from this area came from distribution and rights.

Arthur Rank himself had stepped down from his role at the head of the company way back in 1952, although he stayed on as chairman until 1962. Ten years later at the age of 83, J. Arthur Rank passed away, leaving quite a legacy behind him. He could have never imagined what the company would go on to become.

The COVID outbreak totally floored the company for 2020/2021, so the most recent numbers are not actually very helpful in examining the company’s contributions to the UK economy, so we will stick to the 2019/2020 tax year for now.

Since almost all of the venues run by The Rank Group are in the UK it stands to reason that they employ a huge number of people in this country too. Salaries and wages made up 28.4% of the group’s total outgoings for the year, which is over a quarter of all expenditure, and of the 8,500 people employed by The Rank Group just 2% were temporary staff – that’s a lot of people given gainful employment.

Another consideration is the money the group pay out to their suppliers; so the people who provide their food and beverages, stationary, uniforms, etc.

This accounts for 24.8% of the annual money spent, and once again, with much of that cash going to other British companies The Rank Group are undeniably good news for the UK economy.

We can establish from the information we have that their total outgoings for the tax year were £692,607,003, and with approximately 78% of that going to tax, staff, and suppliers, most of which are UK based, they are pumping somewhere close to £500 million into the UK economy each year.