Entain became the monster that it is largely thanks to the mergers of four other brands which they then went on to acquire, thus creating a very large part of the business and propelling themselves to international status.

Interestingly, while most other business groups in this sector have a well known brand as their catalyst – for example Paddy Power is at the heart of Flutter and Unibet was the nucleus for The Kindred Group – Entain existed prior to owning any well known brands, although they were known as GVC Holdings at that time. They bought in their biggest earners and they didn’t do so early on either.

They are now one of the biggest and most profitable gambling operators in the world, with plenty of plans for the future including a strong foothold in the relatively new American market which holds a lot of promise if Entain can establish their position.

To get a quick picture of the Entain business have a look at the table above.

Below, you can see some of the major stepping stones that led to the company becoming what it is today.

Coral had suffered the loss of its casino licenses in the late 70s, creating profitability problems which led to its acquisiton by Bass plc.

Best known as a brewery, Bass was also big in the world of leisure so Coral was a natural addition to its portfolio of businesses, although it was allowed to operate as its own entity.

In one of the biggest deals of the time, well known bingo and leisure retailer Gala splashed out £2.18 billion to acquire Coral Eurobet and renamed themselves the Gala Coral Group, creating the UK’s 3rd largest bookie and its’ biggest bingo operator.

Coral had acquired Eurobet back in 1999 for 7.1 million and changed its name to Coral Eurobet the year after.

Gala itself had begun life in 1991 as a subsidiary of Bass plc who also owned Coral at the time, but later went independent before circling back around to snap up Coral.

The UK casino brand and the Austrian sports betting brand formerly known as betandwin joined forces in 2011, becoming the largest publicly traded gambling company in the world at that time and listing on the London Stock Exchange

The idea was first aired in a McDonald’s of all places, and rumours of the merger began circulating in 2009, so it was a long time coming; but the combination of Bwin’s sports betting, brand building expertise, and knowledge of European markets, combined with Party Casinos poker, superior cost control, and experience in the American market, were a great match.

The idea was to create scale in order to compete more effectively, and with first year revenues estimated to be in the region of £739 million, scale was definitely what they got.

It was an unusual join bid with William Hill that saw GVC buy SportingBet, an online sportsbook and casino operating an interesting franchise like business model and operating globally.

The deal saw William Hill take the Australian and Spanish divisions of the business while GVC took the rest. The deal was worth a combined total of £530 million but it is unclear how this was split.

Ladbrokes had been after Coral for years, even successfully acquiring them in 1998 for a short time, from Bass plc, before the Monopolies and Mergers Commission (now the Competition and Markets Authority, CMA) decided the deal was anti-competitive and all of the Coral shops in the UK were sold on again for £390 million in a management buyout, leaving Ladbrokes with just 59 shops in Ireland and Jersey.

Two decades later and the merger was more successful, although the CMA got involved again and ordered the sale of 359 shops before the deal could go through; Betfred and Stan James became the proud new owners of those outlets. This time the deal was worth £2.7 billion, and the two high street giants were one.

In one of the more protracted and difficult takeovers on the list, GVC did battle with 888 for 5 months before being chosen by the Bwin.Party board after bidding £1.1 billion for the group.

At the time GVC was an AIM listed share while Bwin.Party had been the worlds largest publicly traded online gambling platform. GVC raised the money to buy the company through several investment firms and private equity groups.

Of course the deal also included various smaller brands owned by Bwin.Party, such as the popular online bingo brand Foxy Bingo (via Cashcade).

At £4 billion pounds, this was GVC’s biggest ever acquisition and also its most significant. The Ladbrokes and Coral brands were both household names in the UK, with hundreds of years of history between them not to mention huge revenues.

The scale of GVC was such that it immediately listed in the FTSE 100, and they now owned established brands operating in multiple geographies, market leading proprietary technologies, run by a management team holding expertise in many different specialities.

This takeover more or less doubled GVC’s size overnight, transforming them into an absolute beast of a gambling company with the power and resources to achieve much more and at greater speed.

Hot on the heels of the Ladbrokes Coral deal, GVC moved to acquire Neds, an Australian betting company only set up the year before by ex Ladbrokes Australia employee Dean Shannon, for £39 million.

The company was growing rapidly due to effective leadership, marketing, and proprietary technology that all fit in with GVC’s business ideals, already grossing £56.6 million in their first year and taking well over £500 million in bets.

GVC already had a strong presence in the Australian market which it considered a core area for business, and this deal cemented their position there.

About the Entain Business 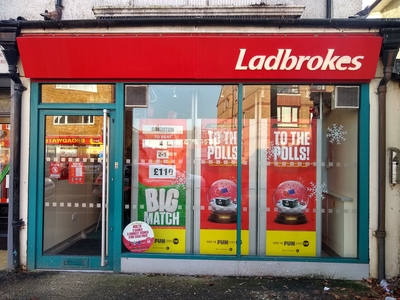 You might notice from the table and timeline that Entain has many more brands under its’ belt than it has made acquisitions. Why is this? Well, one of the reasons the Bwin.Party and Ladbrokes Coral acquisitions were such a big deal was because they themselves were parent companies with many small brands operating beneath them.

This meant that when Entain acquired these parent companies they also acquired all of their subsidiaries; for example, the Ladbrokes Coral deal included Eurobet, BetDaq, and Gala amongst others. So these deals were much more complex, and much more valuable, than it may first appear.

One of the more unique aspects to Entain’s business is that they own brands which collectively run more high street betting shops than any other company. We are of course talking about Ladbrokes and Coral, who have over 3,200 betting shops between them.

This clearly has an effect on their outgoings in terms of staff, bills and upkeep, but also opens Entain up to a revenue stream that only one other group of companies shares; Flutter Entertainment (William Hill and Betfred are privately owned). Not only that, but the marketing and exposure each brand gains simply by existing in every town and city around the country cannot be underestimated.

If we look at Entain’s subsidiaries next we can understand how the cost synergies bring down their operating expenditure. Electraworks is essentially the old Cozy Games bingo network, which Entain can farm out to all of its brands that offer bingo, not to mention the administration costs shared by running everything through GVC Services. Their other non customer facing businesses handle a lot of the tech and can be put to work across their entire network of brands.

So this huge company boosts income by owning many brands that cover all corners of the industry, and brings down costs by sharing resources among them.

The company was founded in 2004, known as Gaming VC Holdings at the time and initially serving mainly German speaking customers through the acquisition of Casino Club, a veteran online casino site dating back to 2001.

In 2007 they launched their sportsbook and also brought onboard Kenny Alexander who would prove to be instrumental in reinvigorating the brand, orchestrating multiple acquisitions of successful brands in Brazil and throughout Europe. They even tried to acquire William Hill in 2012, although it ultimately came to nothing.

It wasn’t until 2015 that the company showed the sort of promise they would go on to achieve, when they announced their bid for Bwin.Party, the group formed by the Bwin and Party Casino merger. In the same year their revenue sat at €247.7 million – remember that figure.

The deal with Bwin.Party went through in 2016 and GVC entered the FTSE 250, and just a year later they went after the Ladbrokes Coral Group (formed when Ladbrokes and Gala Coral merged in 2016).

This was the biggest deal in the groups history and it went through in 2018, turning them into one of the biggest online betting and gaming companies in the entire world. That same year the American market opened up and GVC were quick to move on the opportunity, going into business with MGM International to take advantage of this new wave of potential customers.

At the tail end of 2020 the company announced that they were rebranding as Entain to better represent a socially responsible future. This was unexpected but welcome, as the group also announced a commitment to generate 100% of profits from locally regulated markets by the end of 2023.

As of 2020, Entain’s annual revenue is an eye popping £3.66 billion, more than a 1,500% increase on what it was just five years before (this is why we told you to remember that number).

There have been lots of acquisitions along the way and more to come no doubt, but it was the Bwin.Party and Ladbrokes Coral deals that really transformed Entain into the industry titan it is today.

Having many interests in the UK, Entain contributes more to the country than many other large gambling companies, and not just by way of tax either.

They pay almost the same again to other countries in which they operate, so the UK is by far their biggest market.

The other way in which Entain contribute to the UK economy is by employing thousands of workers both in their betting shops and in their offices, as well as any real estate they rent.