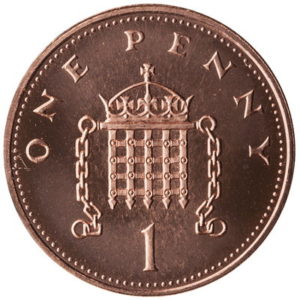 Online gaming can be exceptionally entertaining and exciting to involve yourself in. Yet, there are those games that are just a little bit out of reach for some of us.

We’re not all hugely flush with cash, and even those games that allow you to pick a bet of £1 per spin can soon build up when you’ve made several consecutive spins. Especially if you haven’t garnered so much back from those spins.

That’s why it’s good to know of a few lower stakes games that remain just as interesting and entertaining as the others. 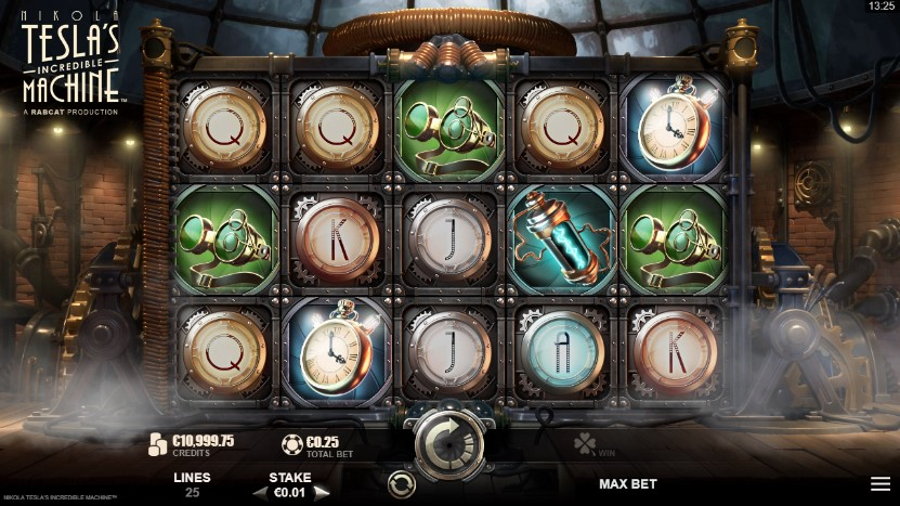 Nikola Tesla is credited as being one of the best inventors in history, being best-known for his contributions to the design of the modern alternating current electricity supply system. While he was born and raised in the Austrian Empire to Serbian parents, he moved to the United States in 1884 and that was where he found his true calling. Yet, in this online slot game from Rabcat (powered by Yggdrasil), his works come to the forefront of any gamer accessing it.

Playing the slot will allow you to experience a five-reel, three-row layout, and the coin value in the slot can be set as low as £0.01. The layout comes with 25 paylines etched across it, so you will always get to bet a minimum of £0.25 per spin when accessing it. That’s a lot better than having minimums of £1 and so on. You’ll also have the opportunity to benefit from Wild Symbols, Free Spins, and Energy Burst Feature and Win Both Ways perks. 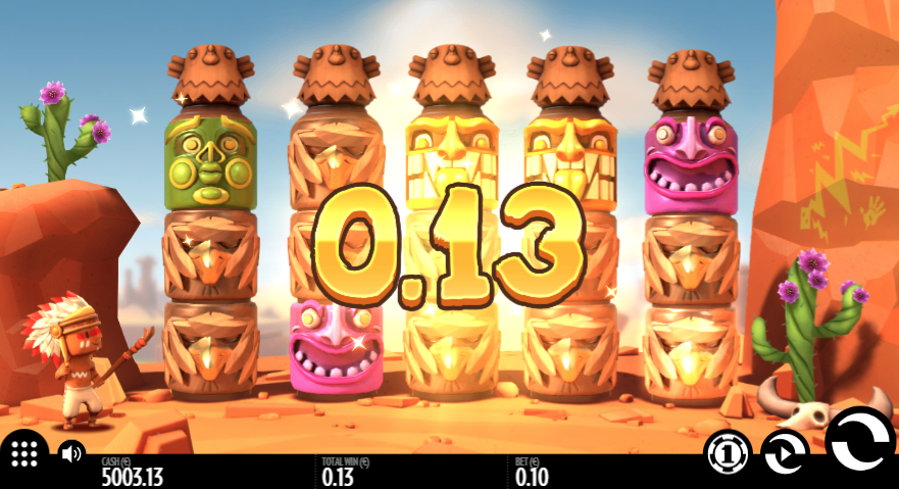 How about a game that takes you to a tropical, ancient island? Well, Turning Totems is the one that you should go for, with its exceptional graphics and entertaining gameplay from Thunderkick. Released in 2016, this slot (as with many others from this developer) brings a unique twist to the style of gameplay. Instead of offering up a set of reels, it provides five totems, with the blocks that create the poles acting as the symbols in the game.

Turning Totems allows you to place bets from as little as £0.10 per spin, which works perfectly for those who have a preference for low stakes games. It also comes with a couple of exciting features built into it as well, including the Thunder Snake Symbol, which turns the totem that it lands on into a Thunder Reel. All Sleeping Wilds on that reel then become active Wilds and a re-spin takes place. There’s also a bonus game round and you can win both ways as well. 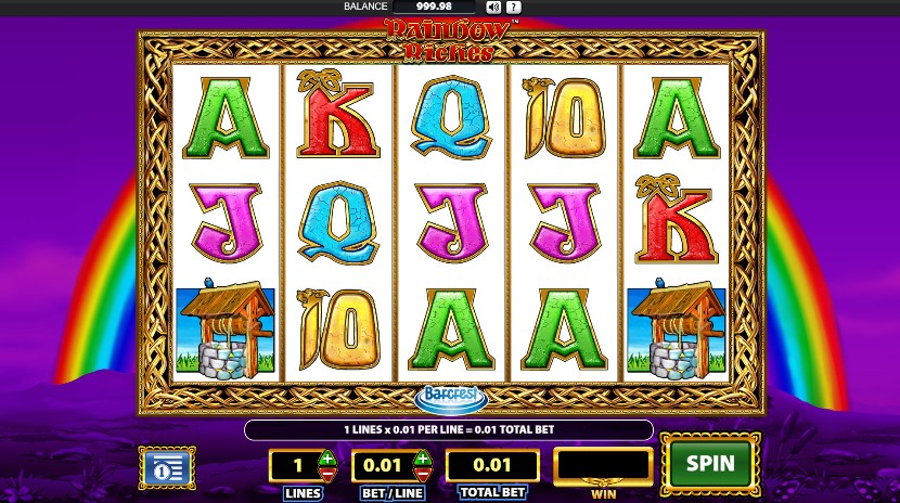 For those who would like to have a bit of fun and really push the stakes down, you’re able to customise both the active number of paylines and the coin value in Rainbow Riches from Barcrest. With this being the case, you can have a single payline in operation and the coin value set at 1p, meaning that you’ll be placing a bet of £0.01 per spin. That’s quite the exceptional thing to provide, although of course, you’ll have less opportunities of winning with fewer lines in action.

Yet, Rainbow Riches is one of the best-known online slots, and it remains just as popular today as it always has been. Incorporating the theme of a naughty leprechaun and other things associated with Ireland, this is one slot that shouldn’t be missed out on. It also features a Wild Symbol alongside various other special features to entertain you. They include the Road to Riches Feature, Wishing Well Feature and Pots of Gold Feature.

While it’s true that there’s a progressive jackpot available for you to win in Tunzamunni, you’ll find that it also has the option of being played with very low stakes involved. In fact, Microgaming has set the coin value and overall bet in this slot to £0.25 per spin.

This is also because it features just a single payline across its central row, and it’s a three-reel game, too. Yet, that doesn’t make it any less interesting for you to access. Plus, the progressive jackpot is on display at the very top of the reels for you to see increasing. This has provided pay-outs of up to £97,000 in the past, making it quite the compelling slot.

The Wish Master by Netent 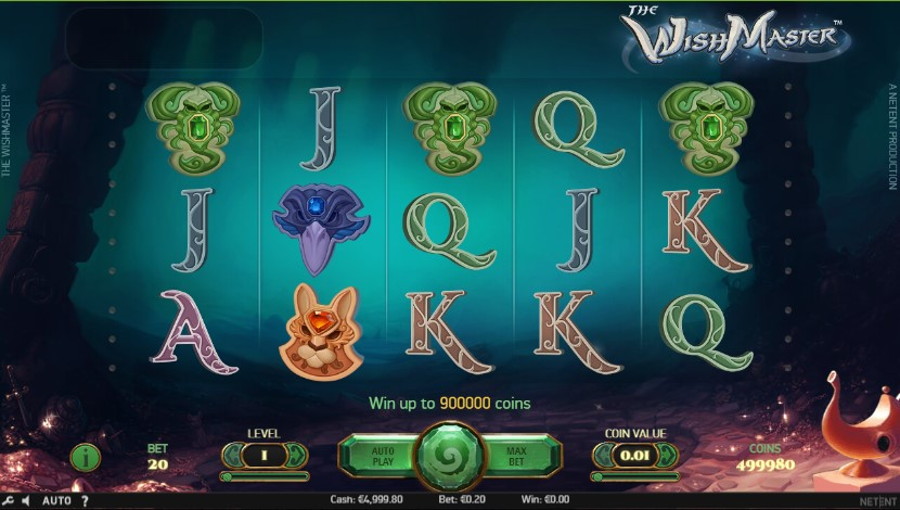 If you’d like your wishes to come true, then you need only ask the Wish Master. He will grant you all the wishes that you require, but you’ll have to find the lamp that houses him first. If you’ve ever played Netent slot games before, then you’ll know that you’re in for a treat with accessing Wish Master, too. In a slot that echoes the tales of Aladdin, it incorporates the usual high-quality standard that is expected from the developer, with perfect graphics and animations. The theme is executed to perfection too, and you’ll soon feel like you’re making your way through an underground cave.

That’s where the Wish Master waits for you, and in this slot, the minimum coin value sands at £0.01. With there being 20 fixed paylines in it too, this makes the minimum overall bet possibility £0.20 per spin. Plus, you get to experience some wonderful inbuilt features, including a Scatter Symbol which releases the genie from his lamp and randomly activates an exciting feature for 10 Free Spins. There are Extra Wilds, Expanding Wilds, Multipliers, Wild Reels and more!