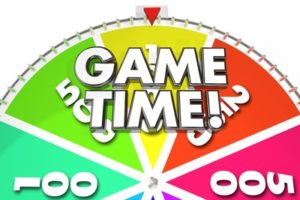 If online betting companies could have their way, the only thing that people would do on their sites is play casino games. They are significantly more profitable for them than sports betting, for example, thanks in no small part to the fact that a House Edge is built-in to every game. If they have 10,000 people playing casino games every day, they would know precisely how much they would stand to win, on average, during the course of a 24-hour period. The problem that they have is that sports bettors are traditionally wary of playing such games.

As a result, companies have mad a move to try to gamify sports betting wherever possible. The long-term aim is to convert at least a percentage of their sportsbook users over to casino games, thereby guaranteeing themselves a knowable profit margin that can aid them in expanding their business. There is an argument from some parts of the industry that the market is demanding gamification right now, whilst for others it is nothing but a cynical move driven by profits. The truth is probably somewhere in the middle, with a portion of customers wanting it but it mainly being the desire of the companies. 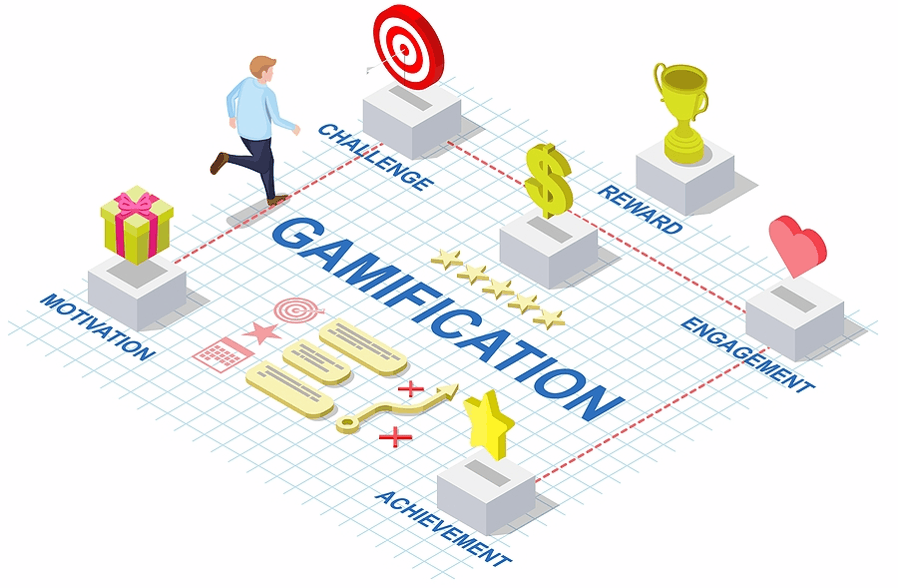 The first thing that might need to be explained to some people is what, exactly, we are talking about when we refer to ‘gamification’. In short, it is a way of making betting into something more similar to a game, perhaps by awarded points or by getting players to compete against one another. Anyone that has ever taken part in a fantasy football league will understand how you can use a sport, in this case football, to score points against others in order to try to win a mini-league or even the overall league in the country.

Any move to add a form of gaming to a bet would be a good example of gamification. It is a way of adding what the company believes will be entertainment value to a bet; something that you’d more commonly find in something like a computer game or one of the games that you might have played in an online casino. As well as being more engaging for some consumers, it is also a good way of engendering loyalty from punters, given that you normally need to built up points or other things in order to take advantage of the game side of bets.

Is It What The Market Demands?

Softswiss, a Sports betting supplier, has recently launched a new Lootbox Bonus product, which is aimed at adding a gamification to its sportsbook offering. In short, it allows people betting on sports to win extra bonuses during the process of wagering on events, which then gives players the chance to accumulate points whilst placing bets. Once they have earned enough points, they can choose a loot box that will appear on their screen, which gives them the opportunity to win as many as three free bets to place at another time.

Loot boxes, of course, first became popular in the world of eSports and video gaming, with the likes of FIFA being a good example of their use. They are a controversial topic for many, with a lot of people considering them a form of gambling because you don’t know what you’re going to get in the box but usually have to pay for them. They are seen as a method of getting young people interested in gambling at an early age by their critics, so it makes complete sense for them to make the jump and begin to appear in the world of betting.

Alexander Kamenetskyi, who is the product owner of Softswiss Sportsbook, has argued back against critics of the move, suggesting that the company is just giving the market what it demands. He said, “When developing new bonuses, we always pay attention to market trends and the needs of the players and operators. Gamification is what the market demands right now and it’s one of the key goals for sportsbook. Lootbox Bonus is a great addition to the features we have already added to our solution. Moreover, it’s a new bonus type for the betting market, so it’s a double pleasure to offer exclusive tools for our partners and players.”

Whilst it is a convincing argument, is it really true? Certainly there is already an extent to which some betting companies follow a similar method of rewarding their bettors. It is not uncommon for sites to offer bonuses for loyalty members, giving them a free £5 bet for every five £5 wagers that they place, say. The difference is, though, those people know what they are going to get. There is a formula that they follow for a definitive reward. Loot boxes aren’t definitive, instead promising a potential reward in exchange for definite betting.

Did It Start With Amazon? 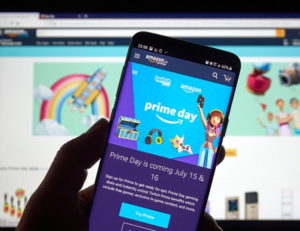 In about 2014, Amazon acquired the streaming platform Twitch. By doing so, they gave themselves the opportunity to combine their coverage of the National Football League with interactive features that often spark a deep connection between sports enthusiasts and the ways that they watch the games that they enjoy. The features allow watchers to enjoy a fantasy football experience during a game, making predictions on the likes of field goals, touchdowns, rushing yards and so on. Users of Twitch are rewarded points for the number of correct predictions, which show up on a live leaderboard each quarter.

This obviously sets the stage for engagement of the customer, many of whom will likely have a competitive edge if they enjoy watching live sport. Those watching also have the ability to chat with others through Twitch, which leads to further devotion to the platform that they are watching the games via. A few years after Amazon’s launch, the US Supreme Court made the decision to legalise sports betting and those that had already been engaging with Twitch and Amazon were well-placed to take advantage of what was to come next.

There is certainly an argument that the gamification of sports betting is aimed at the ever-growing American market. It is not unfair to say that American’s tend to have a slightly shorter attention span than others, which can be seen in how common adverts are in the country. With this in mind, it might well be felt by a number of companies that the best way of engaging an audience in the US with betting is to make it constantly engaging. It is also key to appeal to younger bettors, many of whom do not think there is a stigma about gambling in the same way that older people do.

Why Gamification Appeals To Betting Companies 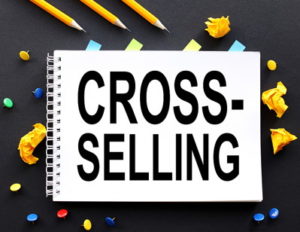 There are numerous reasons why gamification of sports betting is an appealing thing for betting companies to push for. The most obvious one is that it allows for a crossover between two of their most popular platforms: betting and casino games. The former is the most popular thing that gambling sites can offer, but the latter is the most lucrative. If they can persuade some casino users to engage in sports betting then that would allow them to get money off them in two ways, but if they can get sports bettors to head to the casino then that would be dreamland.

Sports betting is profitable for gambling companies, of course, but the very nature of sports is such that there is no guarantee in anything. A week of Cheltenham Festival horse racing in which the majority of the favourites win can all but wipe out a bookmaker’s profits for a large portion of the year, for example, and there is nothing that they can do about it. With casino games, on the other hand, there is a built-in House Edge that ensures that they will make a steady profit over a long period of time, so they can know exactly how much money they will earn from it.

The only people that as good as guarantee companies are profit with sports betting are those that don’t know what they’re doing, which is why there will be an encouragement to see casino users that don’t really know sports but like games move over to sports betting. Meanwhile, if a sports bettor has enjoyed the gamification of one of the sports that they’re betting on then they might be tempted to play a similar game on the site’s casino, thereby ensuring the company concerned a nice tidy profit, possibly from any sportsbook winnings.

The Methods Of Gamification 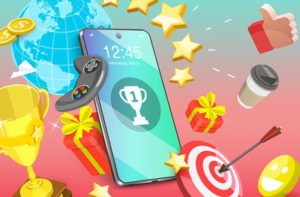 According to the Octalysis framework, developed by Yu-Kai Chou, there are eight core drivers for a gamified experience. One of the key ones is social influence, with social betting becoming one of the biggest motivators for many players. That takes us to the Amazon-Twitch scenario that we mentioned elsewhere in the piece, laying the groundwork ahead of time. Different companies approach this in different ways, but the aim is still the same: get people engaged with each other as well as the bets that they’re placing, usually in a competitive manner.

Ownership and possession is another of the factors explored by the framework. A players gets to acquire something off the back of a promotion for example, which can be the likes of extra bets or and free bonuses. Apps can be used to unlock rewards by doing simple things such as logging into an account or depositing money. However it’s used, it gives the customer a sense of ownership and possession of what they doing, which encourages them to come back in the future in order to hopefully own something else.

Since the dawn of time, marketing people and sales executives have used the idea of urgency and a sense of scarcity to encourage people to buy whatever it is that they’re selling. Most people will have been on a website that informs them that ‘Three people are looking at this right now!’, say, which is an attempt to scare them into making the purchase less they miss out. Offers and promotions will always have time limits attached to them, meaning that people need to take advantage of them quickly or risk missing out altogether. 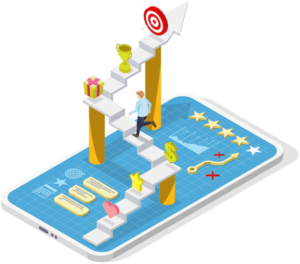 William Lövqvist, the Commercial Manager of ParlayBay, said that the company wanted to fill a gap in the market by offering a game designed sports betting product that would go ‘beyond basic gamification’. The aim of the new company, he said, was to offer the best of the sports betting world and the main attribute of casino gaming. This would, he believed, create an ‘engaging experience for players’ and offer added value for sports bettors. He said, “We started off by fully being dedicated to creating a game changing and engaging experience for the many players.”

The key, he said, is in offering sports betting games with fast game-play that consists of ‘short rounds’, which mean that you don’t need to be an expert at sports betting in order to take part and enjoy it. Alongside the way of betting, the company has also moved to create ‘new yet intuitive permutations of markets and betting objects for players’. The big difference, the ParlayBay team realised, was that casino players tend to stay in the app whilst sports bettors will load the app, place a bet and then leave. Getting them to stick around could be key to having them bet more and for longer.

It is a sign of how companies are looking to the world of gamification to try to figure out how to get better value from their sports customers. ParlayBay launched late in 2021, so we haven’t yet seen how their offering has gone down with traditional sports bettors over al long period of time. What we do know, though, is that they won’t be the last company to look towards gamification. It seems as though that is here to stay, so don’t be surprised if you find yourself being offered loot boxes and other loyalty schemes on a regular basis in the future.